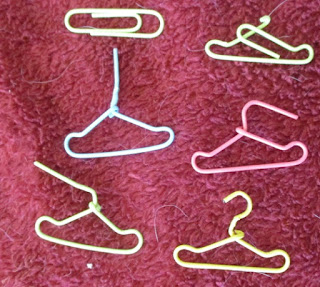 Here are the steps for making the hangers.

I start with a plain old paper clip.  You can use any of them.  I just happen to have a box of plastic coated ones in pastel colors.

I am going to do this from left to right and top to bottom.

Row one.  The paper clip. The second one on that row has the ends crimped into little knobs on the end to hold the shoulders of the aprons on the hanger.  Then you bend the outer end into a hook to catch the rest of the hanger. 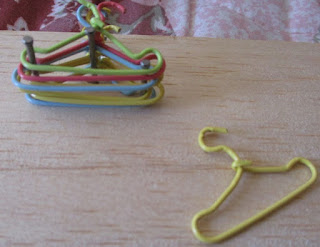 Row two.  I have put the hook end over the other side and bent the tail straight up.  The second one in that row is the tail being bent up, but the tail is going in the wrong direction.

Row three.  The neck is bent in the opposite direction.  It should go to the side of the bend in the neck.  That gives all of the hook the same profile when they are hanging next to each other.

The last one is the finished hook.

Next photo.  Messing with the hangers on the nails to get them to all look about the same. 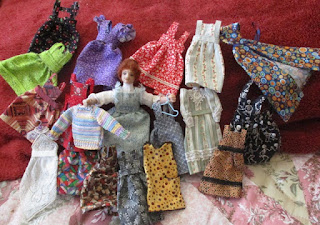 It really doesn't matter that much, but if they are all bent the same way, the closet looks a lot neater.

These are the clothes that Tessie has rounded up to put in the dressing room...

I know that she is going to ignore them, once they are in there, but she immediately went to counting the hangers and the clothes to go on them... Oops!  Too many hangers.  Not enough clothes... 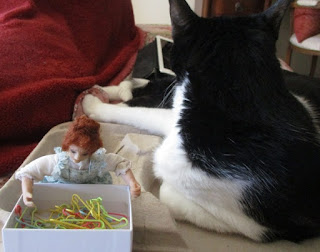 I am in so much trouble! She had a LOT of hangers left over.

Maybe the rest of the hangers will just disappear when she is not looking.

Otherwise, I am going to be making a LOT of aprons.

I am going now to look for a good place to hide the rest of the hangers. I am not going to tell you where I put them.  I don't want anybody to let it slip where they are hiding!

Back to work. See you tomorrow.
Posted by Caseymini at 3:04 PM

Hello Casey,
I never would have thought about using a paper clip to make hangers. They look perfect. You really are a genius.
Big hug
Giac

Giac, they aren't perfect, but after you get the clothes on them, they look pretty good.