One Day at a Time!

Albert is on his way!

I am going to take it slow and get it right. I am trying to find out how tall he was... That's not something that is put with every photo...

Some of the photos of him were taken with other people.  I am probably going to have to guesstimate from the size of the people around him... Maybe.  Anybody out there know how tall he was?

I started with two chenille stems and twisted them together.  Then I folded it in half. I wrapped the top inch and a half with white floral tape. 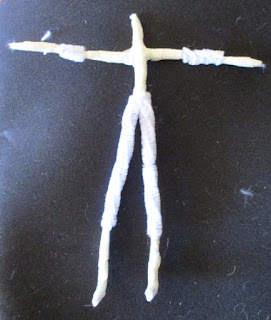 Next, I added arms with one stem folded in half.  I cut that one down some.  I know that he was not terribly tall.  No six footer or upwards.  Some of the people that he was with in photos were a lot taller than he was.

Anyway, I wrapped the shoulder area with floral tape to hold the arms in the right place.

Then I wrapped the hand area with tape.

Then the feet up to the knees. 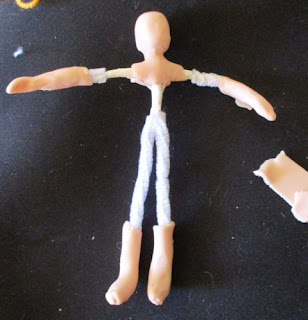 I started putting on the skin... Head first.  That is the most important part. If that isn't the right size, nothing will be.

I put the hands on next and then the feet, but I will be taking the ones that you see off.

I only work on one part at a time.

Head, then hands, then feet. 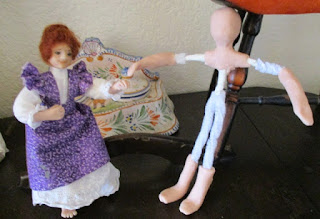 Tessie has already reacquainted herself with the new Albert... He can't see, hear of speak yet, but that doesn't make any difference to Tessie.

She is so excited that she can't see straight...

I don't think that I want to know what is going to happen when Albert starts helping her with her evil plans...

Back to work now.

See you tomorrow.
Posted by Caseymini at 11:41 AM

Thanks Jodi! Believe it or not, that's what I was aiming for. I thought that would be a good size. Now I know.

Albert is coming along nicely. :-) It is really interesting to see a step by step guide to make a miniature person. Good luck with the next phase.

I'm enjoying this a lot, Casey... Seeing Albert being born. Is he going to disappear afterwards, as Daisy did? We don't have her around very often nowadays.