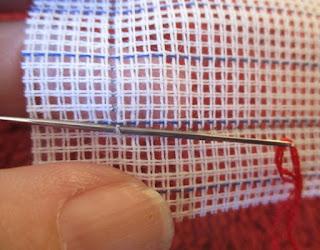 I came up with this idea at one of those three o'clock in the morning moments...

If you try this, please give credit where credit is due.  I don't think that anybody else is doing this.

The canvas that I am working on is called waste canvas.  It is used to do cross stitch on any kind of fabric.  This particular #14 waste canvas can be gotten at Michael's or any store that carries needlework supplies.

It is very inexpensive and can be used for a number of things if you tire of making rugs and pillows. 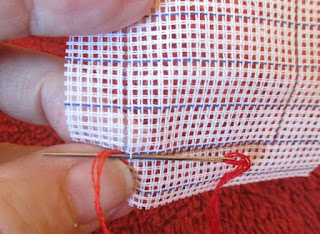 Anyway, the first thing you do is get a pencil and draw off the project that you want to make.

In this case, I decided to make a couple of pillows. This will give you an idea of how to go about it.

The reason for using this canvas is, it's the smallest double threaded canvas that I could find and it has guide lines in blue for every five rows.

You will be using embroidery thread (three strands) to do this. 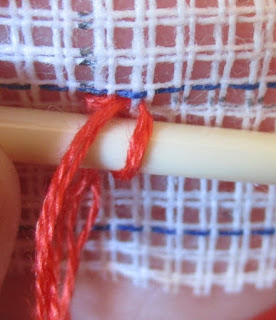 I cut my threads in yard long pieces.  The part that you see done in these photos took one yard long piece.  I split it into two groups of three threads.

The first photo shows that you start at the lower left of the project.  I am just giving right handed instructions.  If you are left handed I imagine that you would start at the bottom right.

You put your needle under the left thread of the first pair of vertical threads, from right to left.  You will always be using the needle in the same direction.

Holding the tail with your left thumb, pull the thread through. Then still holding the tail, put you needle under the right thread of the pair and draw it through.

You should go under the thread that you just put through. This will make a larks head knot. It is the same one that is used to make latch hook rugs. 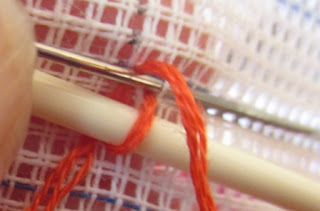 Now you insert a #1 or #2 knitting needle under the row that you are going to work on.

Pull the thread behind the needle and start making another larks head.  First through the left and then through the right.

This should  result in the second larks head knot.

Again put the thread behind the knitting needle and do it again... And again...And again. Until

you get to the end of the row. The whole row will be topped by larks head knots. Pull the knitting needle out. Cut the thread to finish the row.    You should have a loop between each of the knots.
If you run out of thread in the middle of a row, simply rethread your needle with new thread and keep going.  You will not have a loop in that particular spot. Just be sure to leave a tail on the old thread and a tail on the new thread.

When you finish a row take a small pair of scissors and carefully cut all of the loops at the middle. 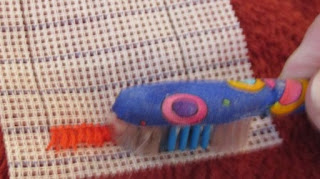 Then brush all of the fringe down with a toothbrush.

Start the next row in the holes above the knots.  If you look at the back, you will see two threads between the rows.  It doesn't show to clearly from the front. 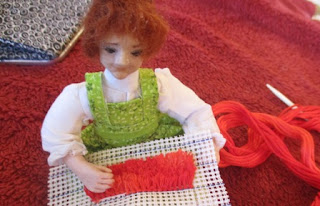 Of course Tessie grabs the project every time I put it down and starts petting it... Guess who wants the new pillows?

The part that I have done in the photo with Tessie is how much one yard of thread, split in half, will cover.

If you want to do a large rug, you will need a lot more skeins.

One yard equals about one square inch.

I will leave you with this much information today.  Tomorrow, I will show you how to finish your project.  Good luck and have fun.

See you tomorrow.
Posted by Caseymini at 10:03 AM

Hello Casey,
Thank you for the tutorial. you always explain everything so clearly.
Big hug
Giac

How cool is that? Thanks for the tutorial. Now I've got to get some waste canvas.