I have Fingernails and New Rings! 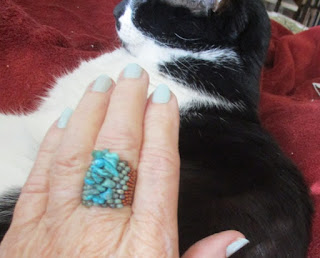 I know that isn't something that everyone would announce, but it has been more than a year that I have been fighting getting my fingernails to grow back.

I am thrilled that they are longer than the bed of the nail now and I can start using them for tools when making minis.

Kota is not really impressed... 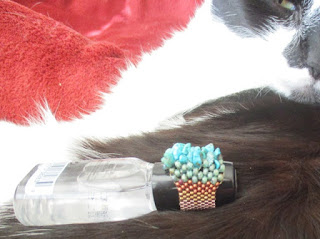 I moved my hand and tried my new ring on a nail polish bottle... Kota liked that even less!

He doesn't really like to be used as background for jewelry photos, but hey, he was handy.

I follow a You Tube jewelry making site called Bronzepony. I was looking at some of the old tutorials that Stephanie did and found a ring that is all peyote stitch. 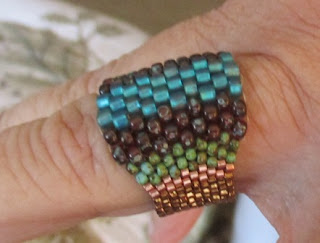 I got all of the beads together and sat down and made this one night before last.

It turned out pretty good... Good enough that Walter wanted it.  Hey! That's fine by me.  That gives me an excuse to make another one.

The second try was the one above.  I had some turquoise chips laying around and decided that I could do peyote stitch with them if I tried hard enough.  I did it. 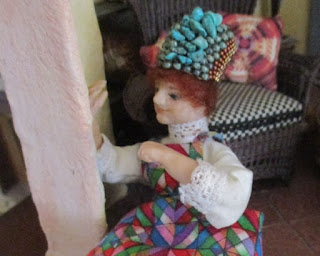 I am on my way now to make a third one... This one, Tessie liked and is wearing as a pillbox hat.

I tried to get it back and she slapped my hand.

Maybe I can make another one that she likes more and then trade her for this one.  I like it and will wear it often if I can get it back.

See you tomorrow.
Posted by Caseymini at 3:14 PM

Hi Casey!
Many years ago I decided to try gel nails and found to my great dismay that they were not for me. Once the gel nails were removed, my real nails were so thin and fragile that they took an entire year to grow out and become strong enough to be called fingernails again, so I know EXACTLY where you are coming from.
Congratulations on not only having your fingernails back, but also on the lovely bead rings you have made to adorn them!

There are good tools that speed up the growth rate of nails and strengthen them. Nail Tek example.