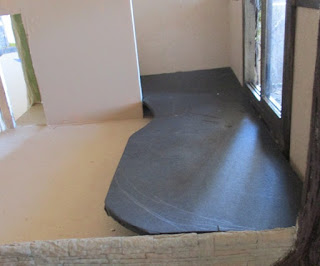 That's my method for doing the floor in this room...

I started with a piece of foam core that was larger than the area that I wanted to cover. 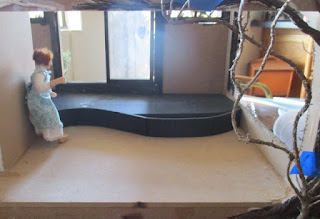 Then I drew lines on the board that I thought would work for the shape of the other end of the floor.

I cut a strip of foam core longer than I needed for the vertical part.  Then I cut slits vertically on the outside of the curve... The left side was at the back and the right side was towards the front. 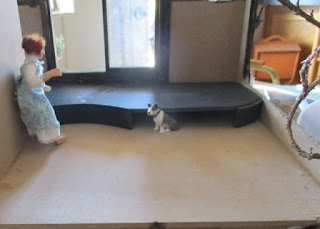 Next, I decided where I wanted the pull out bed and got rid of that part of the vertical.

Tessie approved and Spike wanted it for a doggy cave...  Guess who will win that battle?

I, personally, think that it is going to be a people bed.  Not a doggy cave.  Any takers for the other side?

Where Tessie is standing will be the site of the fireplace.

Now all I have to do is get the two of them to stop arguing and move out of the way... Wish me luck.  I am going to need it.

See you tomorrow.
Posted by Caseymini at 1:14 PM

To get them out of the way: think of something esoteric that you absolutely must have for the build (not) and tell them that whoever finds it first wins the argument.

I have a feeling you'll get rid off them in a hurry, earning enough peace and space to continue the project unhindered.

Hello Casey,
I love the curved floor. As my puppy Ozzy has proved time and time again, there is no such thing as a people bed. Spike will take over it somehow!
Big hug,
Giac