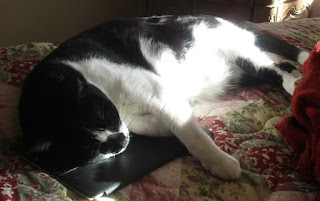 Kota and I got into an argument as to whom owned the IPad that he is lying on,  just a little bit ago... I am now sporting several Band-aids  On my right hand.  He got me with his claws in a couple of places. BRAT!!! 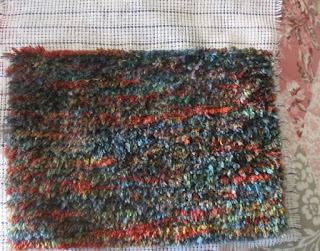 I have another row and a half done on the rug.  Slowly but surely I am winning the race. As soon as I put down the rug and started arguing with Kota over the computer... It disappeared.

I found it in the castle bedroom... It is not staying there!!! 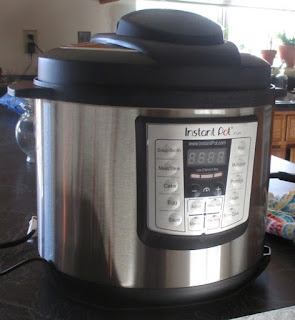 This is what took up most of the morning.  Once I get familiar with this beast, I think that I am going to like it.

I did manage to make spaghetti and sauce in it this morning. It took a while to get it going properly. When Walter got home from golf, I was still trying to get it going.  He helped and the spaghetti was pretty good... Nothing to write home about, but pretty fast. The woman that posted the recipe on her blog raved about it... Me not so much.

Anyway, after I get used to using it, I imagine that it will go better and turn out better tasting things. I bought a pot roast and a pork roast to try out.  It will be great, once I get better at telling it what to do.

Back to work.  See you tomorrow.
Posted by Caseymini at 4:58 PM