Tessie and the "New" Tool! 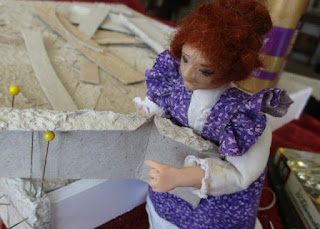 Yes, Tessie is helping and the "NEW" tool is actually an old one that I just never thought of using for glue before...

Tessie is merely pointing to the corner that I was working on when she happened to come into the room. 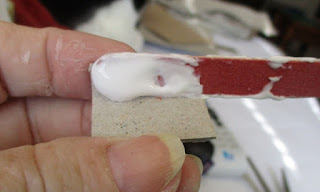 The new tool is an emery board.  I never thought of using them for glue sticks when I have a lot of glue to spread.

I picked one up this morning When I started work on the roof.  I grabbed one to spread glue on the back of the "rocks".

It actually works better than any other spreader that I have used! 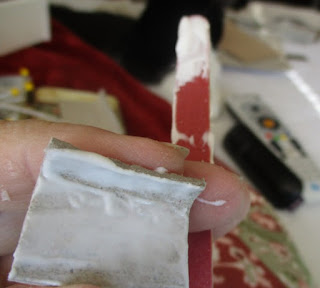 It picks up more glue than toothpicks or Popsicle sticks.

It moves glue around to where I want it and it takes glue off of an area that I don't want it!

It holds on to whatever amount of glue that I want.  Moves the glue better than other implements of destruction...

Unfortunately It doesn't make rock work any faster, but it does make the gluing easier that anything else I have found.

The edge of it will pick up any glue and move it to another area if need be. 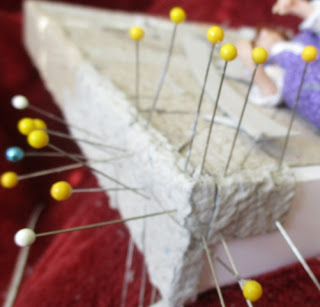 I am doing the roof of the castle bedroom.

I have decided to do the stone work like the stone work on the music room. I am thinking a series of castle room boxes that, when displayed together. shows you the whole castle... Well.  At least two rooms will match.

Here's one of the corners on the edge of the room box.  I simply cut a V at the top where I wanted the stone to have a corner.  Then I glued and pined it in place to dry.

Yes.  I am using a LOT of pins. But as I move forward, I move the earlier pins to the new stones. It is slow work because I cut one stone at a time.  I don't like bricks or stones that are all the same shape and size. 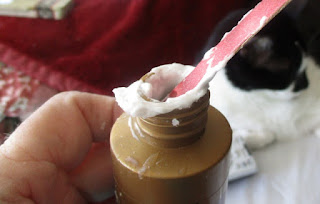 I forgot to mention the best feature of my new tool.

It stays up in the neck of the glue bottle instead of sliding down inside like toothpicks and Popsicle sticks both do.

I case you can't tell, The emery board is my new friend.  I like it a lot.  Try it the next time you have a lot of gluing to do.  You might like it as much as I do.  Also, emery boards are cheap and when one gets clogged up, just throw it away and grab a new one.  I am going back and play some more.  See you tomorrow.
Posted by Caseymini at 2:54 PM

Hello Casey,
Thank you for the awesome tip. I will definitely give it a try soon.
Big hug
Giac

I'm going to have to give this a try, because it would be a good way to use up old emery boards which don't emery like they use to.

Elizabeth, I am not sure how an old one would work. The rough surface is what holds and manipulates the glue. If the old ones don't work well, do try a new one!