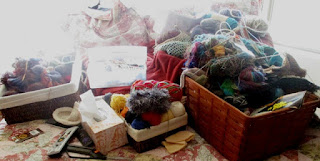 Only to start again...

I decided this morning, that next year is going to be a sock year... So...

First I dug out all of the yarn. I think that I may have enough for everyone in the family and have a tiny bit left over.... Maybe. 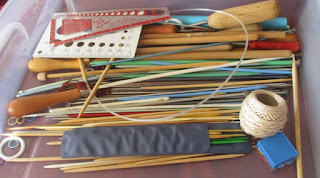 Then I had to hunt up all of the size 2 needles... I still have to sort them out, but I know that there are enough to start every pair that I want to do.  And then some... MORE.

Most of the ones that you see are #2.   I will measure to make sure though.

Some of these I even made myself.  That was when #2 needles were scarce.  When I first started knitting socks, it wasn't a popular item to knit and the needles were a bit hard to find. So I made my own. I still like those.  They  are the length that I like.  Some of the mass produced ones are either too long or too short. 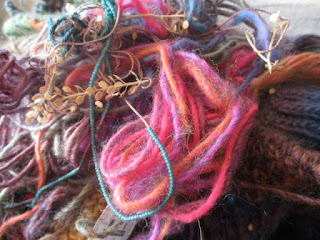 Anyway, next I will have to sort the yarn. We won't talk about the weeds and the beads that are mixed in with the yarn. I think that happened when I was doing some mini landscaping and some beadwork at the same time I was knitting... I have to stop doing that kind of thing if I want to get any socks made. 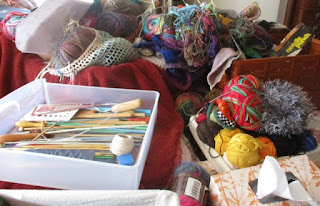 Now I only have one problem left... I have to find a place to sit while getting the mess sorted.

Where do I start? There must be a place to sit somewhere in the middle of this mess.

Back to sorting. See you tomorrow.
Posted by Caseymini at 12:54 PM

Give the yarn to Kota. He'll sort it out for you and get you a place to sit. :-)

I left a ball of yarn out once and when I got home my living room looked like purple yarn had thrown up on it because my cat had so much fun.