Getting Down to the Nitty Gritty... 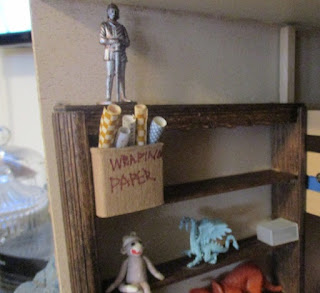 I am starting to add the fine details. Amare keeps and collects all kinds of stuff, so I can put in a lot of things and knowing him, he will start collecting that kind of thing... He has such an imagination!

April commented the other day that he will probably want me to make him real furniture like the small stuff that I'm doing.

She is his mother, and she knows him best.  I am in for it now. 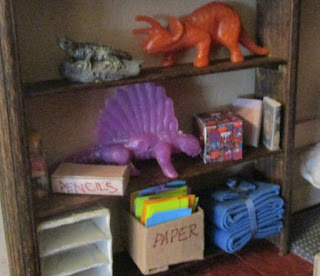 He already likes dinosaurs so I don't have to worry about influencing him there.

The box of paper is cut from post it notes. That is handy because they stick to each other and stay in the box.

The pencil box and the colorful one on the other side of the purple dino both rattle when you pick them up... They probably won't rattle for long.  Amare will probably have them open to see what's inside in a matter of minutes.

No pencils... Just a bunch of beads. 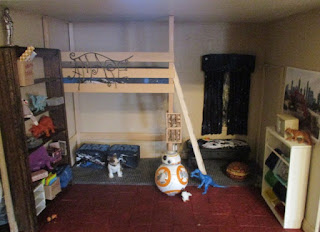 The bench has a plate of fruit slices on it.  I think that they are behind the ladder.  Sorry about that.

You will notice that Tessie and Zar left.

I hired Spike and paid him with a dinosaur bone to keep them out. 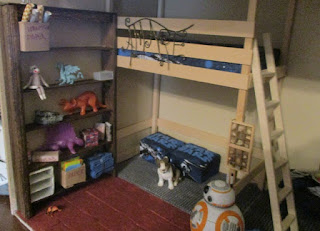 I still need to cover the window on the outside of the back wall.  Probably more Star Wars material.

Back to work on the little things.

See you tomorrow.
Posted by Caseymini at 3:58 PM