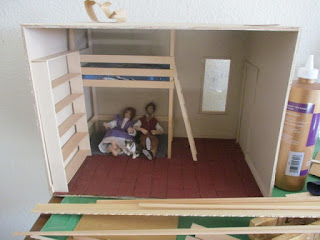 I am right back where I started...

Tessie and Zar called a truce and Spike went along with it... They are all hiding out in the new room.  Lots of whispering.

I am not allowed to listen.

They seem to think that possession is nine points of the law...

Nope! Not happening.  They are about to be kicked out. 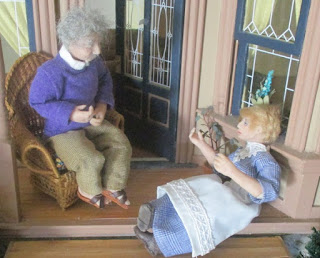 I caught Albert and Daisy with their heads together... Discussing the trade.

Wait a minute... I thought that Albert was joining Tessie in her fight with me!

I think that Tessie kicked him out when Daisy stopped talking about trading with him for the time machine...Tessie was hoping for a few trips in the machine. 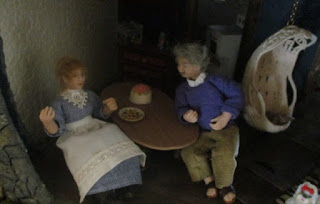 I am not sure who is talking with whom about what...

I think that Albert is playing both ends against the middle.

He now seems to want to move in with Daisy... However... Daisy told him to get out.

Tessie also told him to leave... Poor Albert.  I think that he should just give up and go home.

All he has left is the nine dollar dollhouse! I think that Daisy and Tessie have both decided that they want to keep what is theirs.

And me?  I think that I am about to get demands from all of them for new stuff.... Houses(Albert).
Furniture(Tessie). Zar(His Clockwork Cottage). And Daisy (wants her kitchen finished).

See you tomorrow.
Posted by Caseymini at 3:46 PM

Hello Case
People sure do change their minds a lot in your house. I hope they will back off and give a break for a little while longer. Did you ever think of putting a recorder near enough to hear what they are plotting in the new house ;)
Big hug
Giac

Loving how your little family is growing. And they all want different things... of course. It is such a joy to get back to your blog.