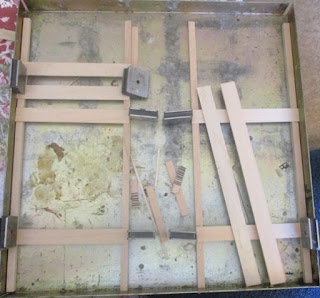 First of all, if you are interested in making a similar bed, go to U Tube and put in "The Square to Spare".

The woman that has this channel does all kinds of modern minis. She has an Ikea bed similar to this one. She uses the craft sticks that you can get at Walmart. Very nice bed!

The reason I am not giving you this pattern is Seth designed and made this one from scratch and I copied his.

First I glued together the pieces for the two ends of the bed. 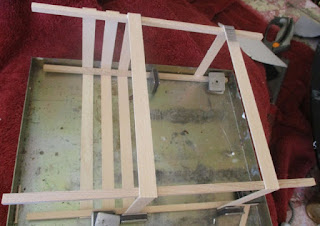 Next I put the other two sides on.

I did it with the front side in the magnetic jig.  It was easier that way. more boards in the tray.

I let the glue dry for several hours. 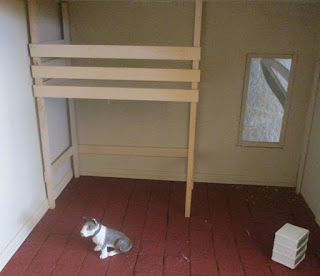 Then I tried it in the room for size.  Perfect.

I still have to put on the ladder. One big difference between the Ikea bed and Seth's.  The ladder comes out of the end of Seth's.

The Ikea one has the ladder on the side. Amare's room is quite small so they didn't want to be tripping over the ladder every time that they walked through it.

Anyway, Now you can see where the bed is to go.I am going to take a few liberties with how the room is laid out.  In the real room there is an arched opening on the left wall that opens into the dining room and there is also a door on that wall.

If I put those two features in there would not be much room for shelving.  By leaving them out, I can put a couple of bookcases by the bed.  I want to have enough shelves that Amare can put books and toys on.  Oh and dinosaurs. The room must have dinosaurs!

Yesterday at dinner, we were told to hush a couple of times so that he could hear the dinosaur music... He has not seen Jurassic Park, but he likes the music. He refers to it as the Dinosaur Music and listens to it a lot.

If I am going to get this done by Christmas, I had better get back at it.  I want to get the Star Wars sheets and curtains going next.

See you tomorrow.
Posted by Caseymini at 1:43 PM