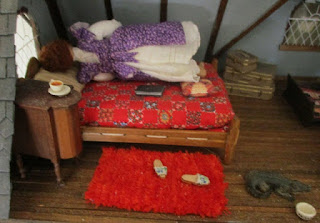 Albert is finding his own way here. He has no patience with Tessie and Zar trying to placate him.

First he sent Tessie home to her cottage.  He told her that he  might sleep in the colonial bedroom.

I have a feeling that he had no intention of going near the colonial bedroom.  The bed is on the short side and he wanted to stretch out. 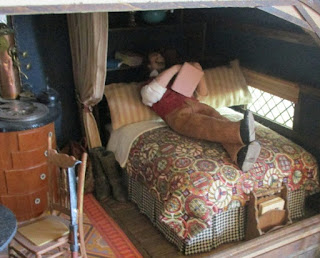 Then he sent Zar back to his trailer... There was a reason for that strategy too.

I noticed that he took a liking to Zar's study as we were showing him around. 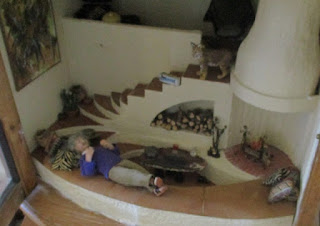 I was right.  After everything quieted down, I went and did a bed check...

Sure enough. Tessie was in her bed in the cottage.

Zar was in his bed in the Tudor Trailer.

And where was Albert?

He was stretched out on the sofa in Zar's study.  He was snoring loudly and anybody within 20 feet of the room was not going to get any sleep at 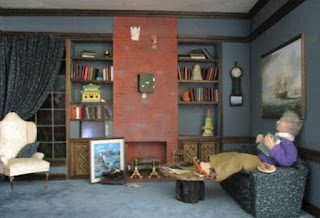 This morning, when I got up, Albert was making himself at home in the living room and the burglar that usually is there, was nowhere to be seen...

I asked Albert about him and he grinned.  Then he shrugged his shoulders and answered...."I sent him home.  He should only be in someone else's living room at night."

"I like this room. It has a comfortable couch, lots of books and a TV. You are going to have to do something about that though. It doesn't seem to be working properly at the present time."

I gave him a pile of books to read and told him that if he wanted to watch "The Lone Ranger", he was going to have to go elsewhere.  That TV gave out about the time that Tessie moved in.

At least he didn't argue, unlike Tessie.  Then he picked up one of the books and a cookie.  He is very easy to please, also unlike Tessie.  He had cookies for breakfast and was about half way through the book by 10:00AM.

I think that he is going to be an agreeable tenant.  Also unlike that other person that I keep mentioning...

See you tomorrow.
Posted by Caseymini at 3:12 PM

It is so unusual to see Tessie in her bed! Albert may be imparting a calming effect on Tessie and on Zar too for that matter!

Hello Casey,
You deserve at least one good tenant. I am glad he can handle the terrible 2.
Big hug
Giac