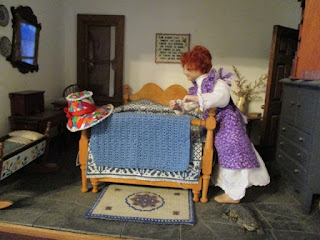 That's what I threatened Tessie with this morning.

I have been cleaning like crazy and she has been going in the opposite direction.

I caught her sleeping in the colonial bedroom again this morning. She said that she couldn't get to her bedroom in the cottage. 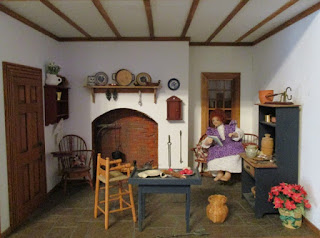 Then she proceeded to spend a couple of hours in the kitchen, reading. At least that room was cleaner.

That could be because I helped her to do that one earlier in the morning...

A couple of the Wednesday Witches showed up to play for a while this morning.  We had a good time. We tried out the new porch furniture.  They approved. 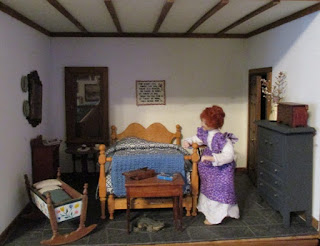 Then we worked on some minis.  Each of us had different projects going.

I made Cuban Tamales for lunch and we made short work of those.

I checked on Tessie a couple of times and she seemed to be making progress... At least the bedroom was looking better than it did earlier in the day...

Then I made the mistake of turning my back on her... 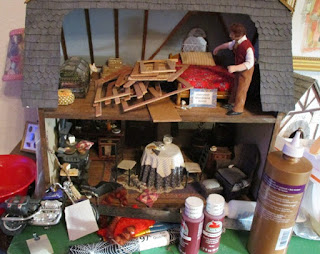 This is what I saw!  Guess what Tessie is going to be doing tomorrow?  No wonder she said that she couldn't get to her bed!

The whole worktable is covered in rubbish!  She hasn't cleaned her own place in a month!  No wonder she likes sleeping in the colonial bedroom...

I think that she bribed Zar to help clean up there.  I also think that Zar is about to throw his hands in the air and go home to his nice quiet little Tudor Trailer... It may be small, but it's neat.  He does take care of his place.

I don't think that I told you.  I found that I had 40.00 worth of gift certificates left at HBS.  I ordered another trailer kit with part of it and another room box with the rest.  As soon as Tessie found out, she announced that since Zar got the last one, this one was hers.  She wants it made into a Gypsy Caravan.  That's all I need.  Tessie as a Gypsy Fortune Teller, traveling around telling fortunes.  She already has Madam Tessie's Fortune Telling Tent... Here we go again!

Posted by Caseymini at 6:04 PM