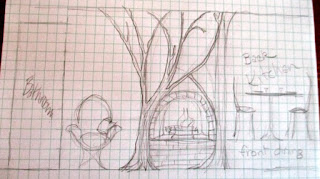 Not even close... I just pulled out a quad rule pad and started sketching... I know it's not in scale, but not to worry.

The first idea was to do more trees... However, what if they catch fire?  Maybe not.

It would enhance  the invisibility factor... But I don't think that I want tree limbs and lots of green stuff inside the living room. 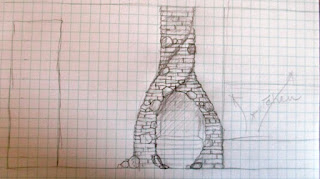 This is similar to the one that I did in the weaver's workwhop, but this one will have some real rocks worked in here and there.

I think that this is the one that I am going to run with.

Then we will have a guessing game as to which rocks are the real thing and which are theater trays. 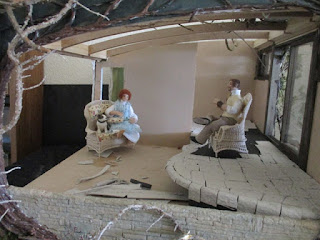 The hearth will be on the wall between Tessie and Zar.  They announced that they will be sitting there watching until I get it built.

I guess that I should get to building before they come up with a third choice of designs.

See you tomorrow.
Posted by Caseymini at 3:19 PM

Hi Casey! Oh my goodness! What a Terrific fireplace this is going to be. There is loads of charm already in the drawings and once it is realized what a Fairy Tale atmosphere it will add to the interior. Looking forward to seeing it!

Hello Casey,
I love your design. It will be perfect! Hum...if they are not going to move until the earth is done...are you sure you want to get it done fast???
Big hug,
Giac