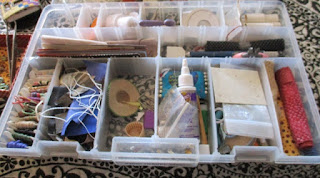 And then walk away without telling me not to play with them.  It doesn't work that way.

First I cleaned and tidied all of the compartments. 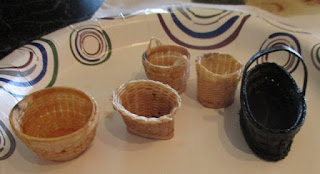 Then I took a break to dye some baskets. The one that I made yesterday, I stained too dark.  Darn it! the other four were sitting in the printer's tray un-dyed. 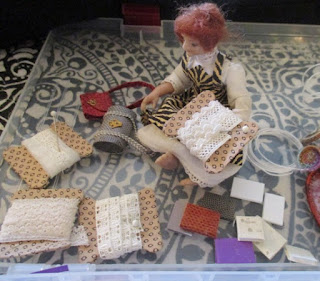 I made the mistake of leaving the box open,.  You would think that I would have learned by now...
I left the bedroom for a minute or two...

When I came back, Tessie was in the middle of the things that I had made.

She was grabbing everything in site. 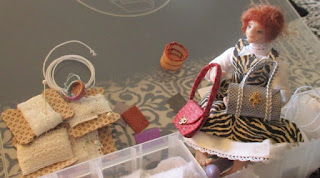 For a while, I thought she was losing interest.  She moved to the edge of the box... She only took two purses with her.

Then she explained that there was a better view from up there...

She then looked me straight in the eye and exclaimed, " ALL MINE!!!". 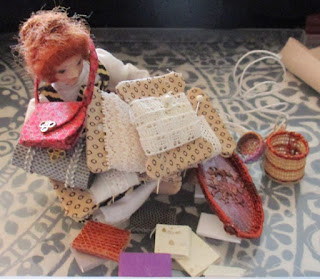 The rest of the conversation was...

Tessie: The lace can  go on the edges of the new clothes that I will require, to go with my new nose.".

Me: "Who said anything about a new nose?".

Tessie: "I did.  I fell off of the table yesterday while you weren't around.  You need to fix it.. I also pulled my left arm out of the socket at the elbow..." \

Tessie: "New Clothes all around would be nice."

I knew I should have kept my mouth shut... I am off to do a "Full Tessie Repair".  See you tomorrow.
Posted by Caseymini at 8:56 AM

She sure is keeping you busy