The Oldest and the Most Work... 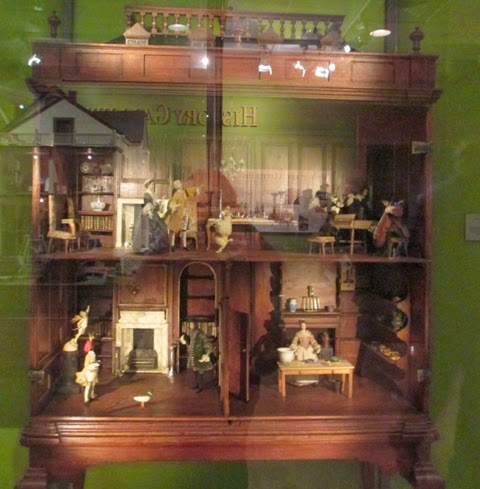 I decided to continue the Mini Time Machine museum tour this morning.

This is the Dainway Cabinet House. It was one of the last ones that I restored.

Believe it or not, this beauty had on average, 8 coats of paint in each room. I did research on each house as I went along...On this one Pat found a pertinent clue about the wild paint parties.

When it arrived, the outside was painted Pepto Pink, as was the original table that it sits on.

Someone had stripped it of it's original doors.  It had glass kitchen cabinet doors on it.

At least someone had cared enough to take the original furnishings out and store them away. 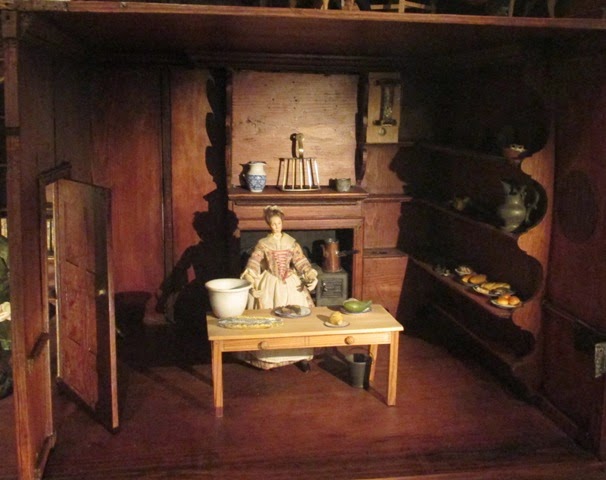 The kitchen was painted lemon yellow, with POSTER PAINT!  That's when Pat started trying to find out why someone would do that.  Even the floor was painted.

I spent many hours with my head inside the rooms of this house...Smelling paint remover.  Maybe that is why I am a bit peculiar at times...

As I stripped paint, layer by layer, Pat researched the paint problem.  There were several other different kinds of paint, besides the poster.  I don't even want to think about the lead paint that was involved...

Anyway, she finally found the answer.  It was lazy nursery maids that caused the problem. It seems that, down through the years, if a nanny didn't want to watch the kids for a while...She handed them a can of paint and some brushes and told them to paint the dolls house.  Then she would go put her feet up and eat chocolates and read a good book.

The upstairs of the house is a ballroom.  The furniture is all original to the house and similar to the pieces at Knowle House.

The people are of a later period, but did come with the house and are dressed in costumes of the period.

The heads are carved wood.  The bodies and limbs are thread wrapped wire.  Even the fingers.  I didn't have to do anything to them.  I did have to replace the pink rind stones that someone had replaced the poodle's eyes with.

All of the silver that you see in the ballroom is original and real silver.  Each piece has English hallmarks. 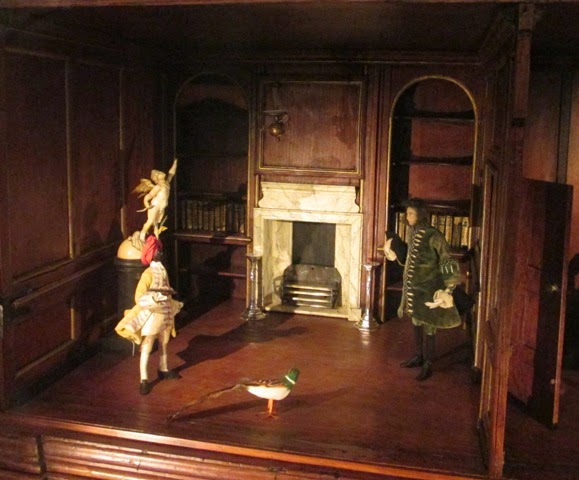 The books on the bottom shelf in the ballroom and on the shelves in the library are a complete collection of William Shakespeare plays.  They can be taken out and read.  The paper is extremely fine.

We had no idea why the duck was wandering around in the house, but it was there, so part of the furnishings.

I neglected to take photos of the doors of the house. I am especially proud of them. I did the research and detective work.  They look like the original doors would have looked. The cabinet has five panels across the top thus the Georgian front would have had five divisions for windows and doors.  Originally, there was another wall on the bottom floor.  I found the marks where it would have been.  The front door would have been at the center, with a hallway behind it.  We decided not to put that wall back.  Someone had done a very good job of moving the wall that was still there and building it into the back.

Under all of the coats of paint...I found the remains of a painted marble fireplace in the library. I painted a whole new one, as close to the original as I could make it.

As I mentioned before, the cabriole legged table was contemporary to the house and built to go with it.  On the whole, the house looks like it would have in 1775.  At least I hope it does.  It's as close as I could come to the real thing, under eight coats of milk paint, lead paint and poster paint...Just to name a few...Stripper doesn't always work on the old paints.  Sometimes it just takes a lot of elbow grease.

Speaking of elbow grease, I need to go use some on Daisy's cottage now.

See you tomorrow.
Posted by Caseymini at 11:34 AM

A lot of work but definitely worth it. Sometimes people think they are helping a project but are actually making it worse. A similar thing happened to an old doll I had in the 90's. It had its sleepy eyes and wig replaced. I really wish they had left it alone.
You have done a marvellous job of it!

Hi Casey! What a lot of work restoring this doll's house must have been but So worth it! You can be proud of your unique skills which have stood the test of time.
How Marvelous that you have the opportunity to revisit your work at the museum. That must give you a warm fuzzy feeling every single time you visit.
And I am sure that the duck is always glad to see you too! :D

What a Gorgeous old House, Casey! You did a fantastic job of restoration... the woodwork looks beautiful and so well constructed! All the basic parts have that wonderful patina of older antiques! And even the dolls are gorgeous examples of their times!
The next time I fly into Tucson I am going to make sure I stop at that Museum! Thanks for sharing these old works of art!

What a beautiful house! You certainly did beautiful work on it! The furniture, accessories and dolls are exquisite! It must bring back memories when you revisit it!

This is a gorgeous house Casey. I love the old wooden houses. I hope you don't mind I have put a link to your blog on the Dolls Houses Past and Present site as I am sure some of the members would love to see this house.