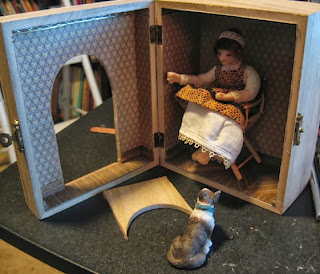 Spike woke me up by hitting me over the head with a two by four this morning....It didn't hurt much.  It was 1/12 scale.  Kind of like being tickled with a toothpick, but it did get my attention.

He dropped plans for a dog house on the bed and just stared at me.  I took the hint.

Remember the box from the other day?  That's what he wanted.

I went into the workroom and grabbed a hammer.  I had to get the(what I thought was plastic) glass inset out as a first step.  Luckily, it didn't break on the first blow.  I realized immediately that it was NOT plastic.  I carefully covered it and hit it again.  This time it looked like a spider web.  I carefully pulled out all of the pieces and cleaned it up, so that there would be no splinters of glass left. 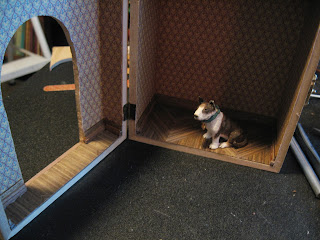 Then I went to work with a keyhole saw and made the oval into a door.

I simply cut straight down from the widest spot in the oval and then pulled out the piece.

By the time I had two pieces of wallpaper cut and installed, Tessie was nosing around.  "What'cha makin'?"  Here we go again...."Tessie, this isn't for you.  Go away."

That didn't work.  She pulled up the director's chair and of course, started directing...

"This ceiling is much to short and the quarters are cramped!" she announced.

I answered with, "Buzz off, Tessie!"

Spike answered by growling like I have never heard him growl before. 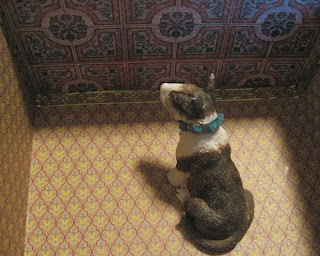 By that time I had the floor, moldings and ceiling installed.  I have gotten into the habit of working around witches, dogs and mad Steampunk scientists.

The ceiling is actually some floor tile that I found on a real tile site on the net.  It was one of the four part squares that you see.  By putting it in my Print Shop program, and reproducing it a number of times, I got a pretty good tile floor. I printed it on card stock.  Then I sprayed it with Patricia Nimock's spray sealer to keep it from fading....I decided that it would make a nice ceiling for Spike's house.

I think that he is pleased with it too.  He just sits there and stares at it.  As soon as he finishes staring, I will start working on the outside.  I am thinking half timber, plaster and stone.

I have to go now and give the dog a bone, so that he will stop staring at the ceiling... Do you have this kind of problem when you are trying to build something?  Or is it just me....?

See you tomorrow.
Posted by Caseymini at 10:10 AM

I'm so glad you are building spike a house. I'll have to be careful my three full size dogs don't see these posts or they might get ideas.

Hello Casey,
It is coming along beautifully...Dewell Manor does not have any inhabitants yet, so I am free to work in peace.
Big hug,
Giac

Good old Spike! He deserves his own house. I do get more done now the A-team is on a honeymoon, were it not for the real life cat having jealousy issues now. He won't let me glue, sand or paint and he's a lot more difficult to get rid of than a 1:12 cat!

Giac, if you. Are smart, you will prohibit anyone from moving in! That's when the trouble begins.

I know why he is staring at that lovely wall! its gorgeous!
Spike will be a happy dog all right!

it's wanderful you already start a new project .....and we can follow it!!! ciao ciao Franca