Come along with me and make a mini Santa from poly clay for your house or Christmas room box. This is one of those things that I do on the spur of the moment to entertain myself. I was in the mood to play and this is how I played. 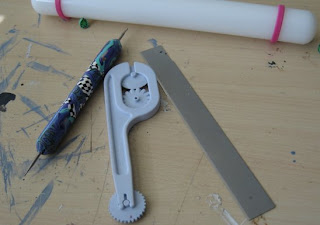 These are the tools that I used. The rolling pin at the top of the photo is one that I have shown before. The pink bands on the ends allow the rolling pin to make an even slab of clay. It is a fondant roller made by Wilton. I use it when I am too lazy to drag out the pasta machine.
I am sure that you know about the ball pointed stylus. That is like my right hand in all kinds of crafts. The outside of that is covered with canes of poly clay to fancy it up. The clay blade is self explanatory. The wicked looking tool in the center is a Wilton cake decorating tool. I got it at Wal Mart for about 3.oo. It is meant to make "stitches in fondant frosting. The other two wheels stored in the handle are for a kind of zigzag edge and one is a plain cutter. I use all three for various poly clay projects. No. They do not belong near food! 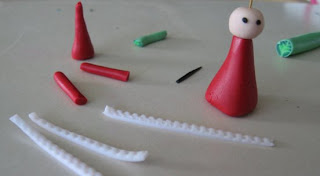 I used red, 1/2white and 1/2transparent, and black poly for the snowman. The green cane is a leaf cane that I made some time ago. It will be used for holly on Santa's hat. If I didn't already have that made I would have used plain Christmas green.
As you can see, I rolled one cone about 1/2" across the bottom and 3/4" to the flat top part. I rolled another that is about 1/4" across and 1/2" high. This is the hat. I then did two pieces about 1/2" long, rolled out to about 1/8" inch. There is a small scrap of black that I cut the end from and made the eyes. Santa has a piece of one of the head pins pushed down into him so that everything will stay together.
The transparent white was a scrap rolled out thin and then I ran the tool of torture over it in parallel rows and cut it in strips for the cuffs of the garment and hat. I made one small white ball for the end of the hat, a wider strip for his hair and a triangle for his beard. 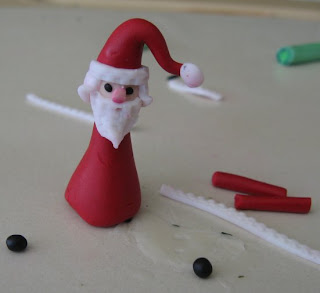 His nose is a small ball with a bit of red added.
He now has the trim around the bottom of the hat, his hair and his beard. I kind of turned up the front edges of the hair and poked a hole in the beard so that he would look like he had a mouth.
The two black balls will be flattened slightly and stuck half way under his coat. Then the piece of fur trim will be put around the bottom.
I forgot to mention a small strip of black for his belt and a tiny gold square with two holes in it for the buckle.
The arms get rounded and slightly flattened on one end for his hands. A piece of the white trim gets put on about 1/8" from the end. The other end gets really flattened so that they can be smooshed(technical term) against his back and his hands pulled around to the front. 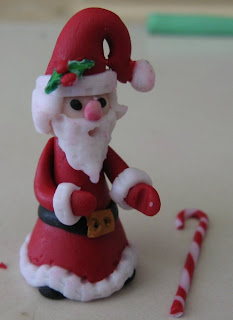 When he is all put together, this is what he looks like. I put a couple of leaves on his hat and a couple of tiny round pieces for berries.
I used some of the red and white scraps to make a cane by making two snakes and twisting them together. I then cut off the ends and then put a crook in one end. This will go in his outstretched hand when he is finished cooking.
The little guy is cooking now. He will be on the front porch of the basket shop when you next see him. I have to go now. I wouldn't want Santa to get over baked!
See you tomorrow. Ho! Ho! Ho!
Posted by Caseymini at 12:44 PM

Ohhh!! He's just too cute! TOO CUTE! If my daughter sees this, we'll *have* to make one.