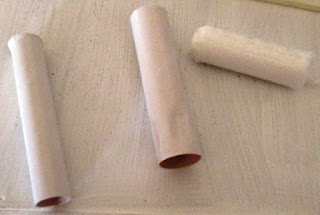 OK.  Giac asked for the bolster pillow, so I will do that one first. Giac, I don't know if you have Dollar Tree stores in Canada, but if you don't maybe you could just check discount stores or maybe hunt around on line.  Good Luck!!!

The important part is that the tubes are cardboard and not plastic.

These are the three pieces that you are going to get in every little package.  Remember the ones that I got were 8 for a dollar.

From left to right.  The pusher for the tampon.  The center one  is the largest and it is the one that I used. Don't throw the tampon away! Those make great applicators for stains and other finishes. So everything in the box is useable.

If you want a longer bolster, you can use two of the larger size and one of the smaller size glued in the middle. I use these on beds.  The one in the fourth photo is the end of one of those.

It extends the full width of the bed for the other pillows to rest on.

For this try I am using a short one.  You cut the fabric long enough to fit around it with enough fabric on one edge to turn under and glue. You also need about a half inch at each end. 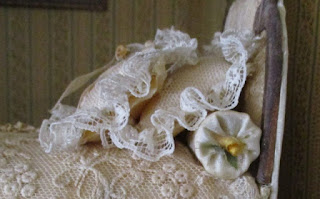 Then you use some light weight batting to make it a bit puffy.  Not much.

You  turn under the one edge and glue the fabric around the pillow with about a half inch on both ends. You run a line of stitching around the ends and turn them into the center hole.  Then you pull up and make them tight in the center of the end.

You will need to cover the center with some kind of trim. On beds I usually use roses or bows. 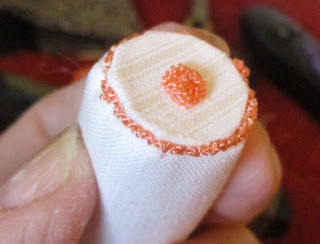 On the one that I just made, I did the simplest one that I usually use on couch cushions and daybeds.

I simply used a circle of cardstock covered in the fabric and turned under all around. Cut little Vs in the material. Then I glued it to the end and unraveled bunka to glue around the edge. I simply put a dot of glue in the center of the circle and used the same bunka to cover the glue. you could also gather up some ribbon by pulling thread and glue it in place.

If you have any questions, just yell.  I'll be here...

Thank You for your tutorial Casey, your bolsters are lovely and they look fun and easy to make, too!

Hello Casey,
Thank so much for taking the time to write this tutorial... I really appreciate it.
I cannot wait for my husband to see me get home with a pack of tampons!
Big hug,
Giac

What a cool idea and nice tutorial. Thanks for that.