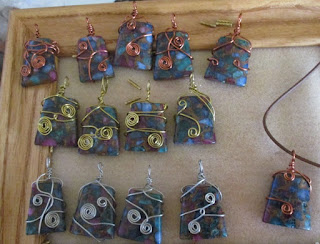 I went back to work this morning.

I did 14 pendants.  That way, the Witches can choose which one each of them wants and I will have some left over for other people.

The one at the bottom right is the one that I chose. The rest are up for grabs. After I finished those, I mounted all of the stones that I plan to bead around.

Six are for beading the two fossilized shells in the center are already to be earrings when the findings that I glued to the back are dry. The shell below those will be beaded to match somehow. 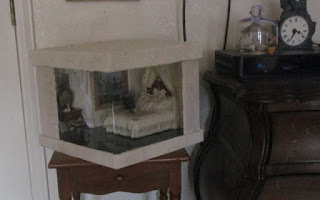 I did get a bit of antiquing done on the bedroom, but it still isn't dark enough to go with the music tower.  Back to the paintbrush when I am through here. 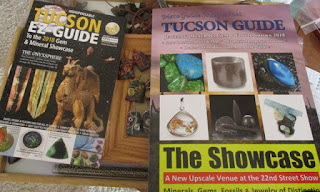 Joan picked up one of these for each of us on the way out of the big tent at the ballpark.

The larger of the two is a half inch thick... Maybe that will give you some idea of how big this show is.  It is all over town in hundreds of places.  I did hit one show besides the ballpark, but that was because we went there with the kids on Saturday. The only other one that I hit was the ball park this year, but I did it three times.

I am a happy camper now.  What I got will keep me in stones for another year.  We won't talk about the ones that I have left from previous years... Nope. Not going to discuss those stones...

See you tomorrow.
Posted by Caseymini at 3:55 PM