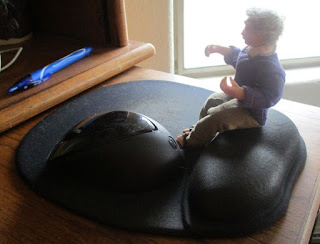 I think that I just got myself into a lot more trouble. As soon as I finished the clothes, Albert woke up.

There were a lot of questions to answer. "What am I doing here?"  Where's here?  "What is that contraption on the desk?"

On and on they went. 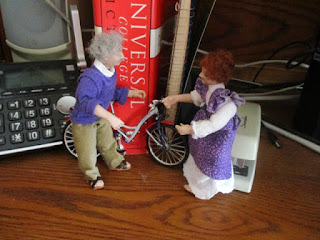 Thank goodness, Tessie arrived about then.  She took over.  I think that he recognized her and trusted her more than the gigantic woman that was terrorizing him... (Me)

She peddled in on her bike and he immediately wanted to ride it.

She talked him out of that.  I think that she was afraid that he would fall off of the desk and wreck her bike and himself... 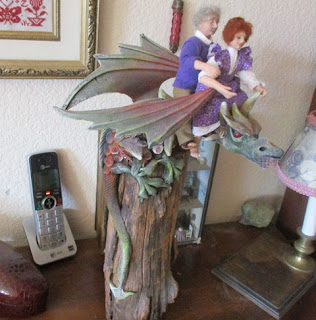 Instead, she said to him... "I have something that is much more fun than a bike to ride.

And she proceeded to introduce him to Gordon.

She plopped on Gordon's neck and pulled him up after her.

I doubt that Albert will trust her after the ride is over.  Yes. They were still spinning around my head as I was writing.

After that, they disappeared. I had to go see where she took him and if it was dangerous for either of them... 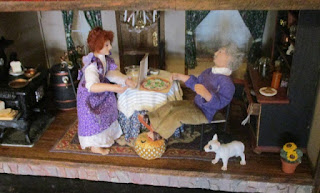 Nope.  She next introduced him to carry out pizza.  He lived in Italy as a youngster, so at least he knew what it was.

I left them alone, knowing that Tessie would take care of an old friend. 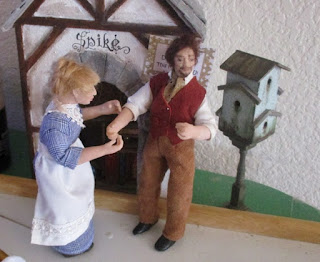 I looked over to the other side of the room and saw Zar and Daisy with their heads together... I over heard Daisy say, "You know... For a fee, I could take him back to the 1950s and we could all avoid a LOT of trouble."

Zar just shrugged and answered... "Nope.  I want to see how long the novelty will last.  Sooner or later, Tessie is going to get tired of answering all of Albert's questions. Then the fun will begin, again....

See you tomorrow.
Posted by Caseymini at 11:39 AM

Albert looks very comfortable in his new clothes and I think that you have done an Amazing job with all of him and that riding on the back of a dragon is FAR MORE FUN than riding a bike ;D
Welcome Albert to Casey's World !

He is remarkable, Casey! I love his sandals!

Hello Casey,
You did a fantastic job on Albert, and while they do all drive you crazy, think of the fun adventures that await!
Happy Halloween and a big hug,
Giac