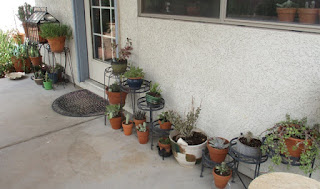 I escaped to the back porch this morning.  It was in dire need of cleaning. 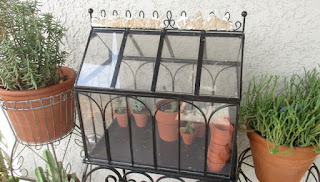 I think that I told you that I was going back to greenhouse in real life, instead of conservatory in miniature. Tessie isn't happy, but I am.  I will have a place to start new plants. She is just going to have to live with it! I still have to remove the rest of the clay from the top.  A little at a time is how it is going.  Any suggestions? I did some of it with a wet paper towel to soften.  Then I did some with an exacto knife and a hammer... Sooner or later, I will get it all off. 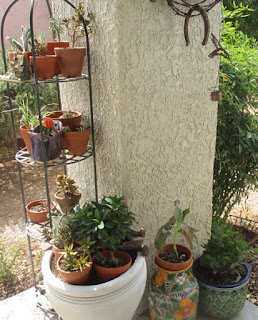 I did get a lot of the plants repotted.  Some were outgrowing the pots and some were just ready to give up the ghost.

The big pot at the bottom of this photo has several smaller pots inside now.

That is the only thing I could do to keep the squirrels from burying and digging up nuts.  The pot was convenient for them... Not much fun for me though. I had to clean up after them every few days. Silly squirrels! 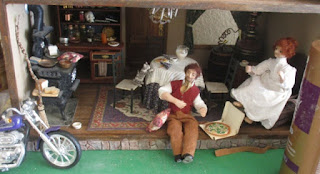 While I was cleaning and repotting, Tessie and Zar ordered another pizza and are watching Wynona Earp for the second time. I do wish that Netflix would get the second season.  Maybe I could talk them into watching that one, instead of the first season over and over.  This is only the second time, but I am sure that there will be a third and fourth if the second season doesn't come on soon.

Anyway, I think that I am going to maybe work on a Rya rug and watch with them... I am tuckered out.

See you tomorrow.
Posted by Caseymini at 2:16 PM