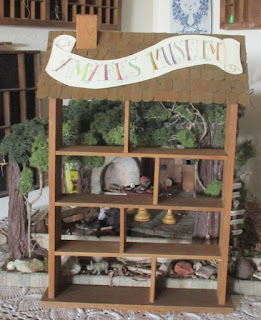 It's another... I couldn't work on the two rooms this morning because this got in the way.

We are going over to stay with Amare while his mom goes to a meeting.  Seth is out of town so we are the elected sitters.

I found this shelf out in the garage and decided it would be good for some of Amare's latest treasures.

April says that his room is starting to look like a natural history museum.  He is collecting rocks and other nature things.

This morning, I added the sign and we will take it with us this afternoon.

This is going to be a full day. 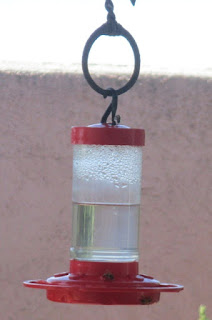 It is Wednesday so there will be a gathering of witches.  As soon as I get home we will leave for Aprils.

The title was suggestive of what is going on in the back yard now.

For the past few weeks, the hummingbird feeders have been cleaned out by bats every night.  This is a yearly happening.  The hit here every winter when the season starts to change and it gets cooler.

Just when the bats seem to have left(migration) the bees take over. They are just starting now.  They will also disappear in a couple of weeks.  The poor hummingbirds are having to wait in line to eat. 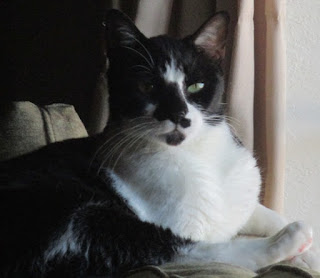 I am not sure what I did to make Kota mad, but for the past two days, he has been ignoring me.

I did something that he didn't like. He is at least posing for me when he sees the camera.  Otherwise he just puts his nose in the air.

I will wait patiently until he gets done being in a snit.

Anyway, I thought that I had better write something before Wednesday Witches.  There probably won't be much time after.

I am off to get ready to go.

See you tomorrow.
Posted by Caseymini at 11:44 AM

Hello Casey,
I hope Amare loves the museum. It is such a great idea. I also hope Kota comes around...they can be so sensitive, can't they.
Big hug
Giac