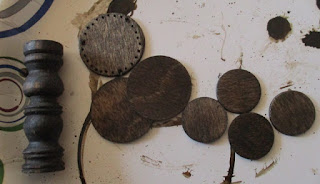 Daisy tripped me as I walked by the Observatory this morning...

She pinned me down and hissed at me... "I need a place to sit when I am using the telescope..."

I am not going to argue with someone that can send me into outer space, never to return, if I don't do what she says... 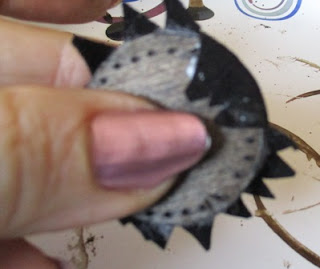 So.  I rounded up one of the very first pieces that I ever did on a lathe, some woodsies and some leather.

I did this one basically the same as the kitchen stools, with the turned piece where the teak beads were in the other stools.

I was one short on the larger round pieces, so I borrowed one that had been drilled for a basket.  Nobody will ever know if you don't tell on me.

I padded that one with the batting and covered it with leather. 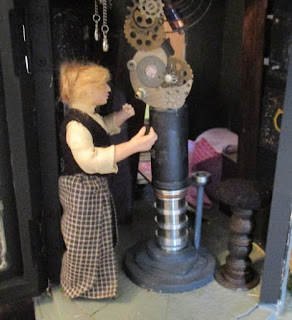 Then I stacked up the other pieces in a pleasing manner, as Daisy would say.

Two of the large discs then a couple of small ones stacked on the bottom.  Then the turned piece.  At the top, a large disc with the covered one on top of that one.  Then I banded the top of the seat with another strip of leather...

After Daisy's approval, I was free to go.

Remind me not to walk to close to the Observatory in passing...She is going to want the kitchen and the library finished if I get too close!

See you tomorrow.
Posted by Caseymini at 2:30 PM

I'm glad that you were able to please her. What would we do when you're outer space...