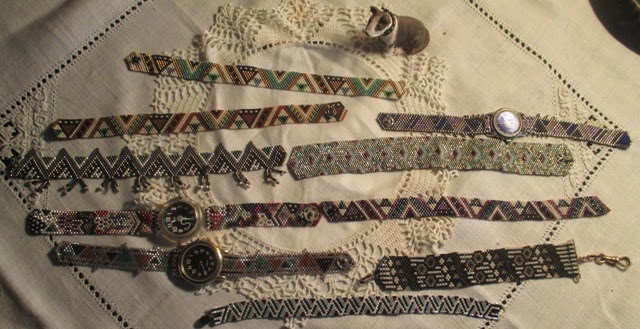 I went out shopping this morning and didn't get a thing done in mini. I decided that, in place of mini work, I would show you some of the beadwork that I do between minis.

Every once in a while, I find myself in a rut.  Thankfully, it's not in minis.  It's in beadwork and jewelry.

For a long time, every time I would put down the mini tools, I would pick up some delica beads and do peyote stitch beadwork... This is just some of  the bracelets and watches.  I have covered round vases and even in a pinch, the tubes that the beads come in. That phase was started about 20 years ago and is still going strong.  I will probably never quit peyote stitch. 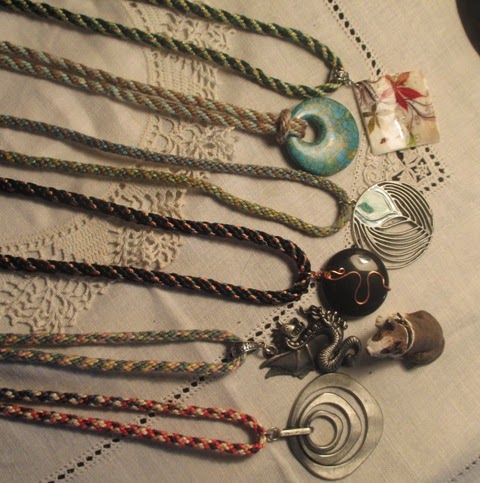 This is kumihimo braiding.  Its not technically beadwork, but it qualifies as a rut.  For a while, a few years ago, I was carrying a kumihimo loom wherever I went.  It is a very portable craft and almost as addictive as beadwork...

After a while, I outgrew that. It was the same thing over and over and boring if I did a lot of it... 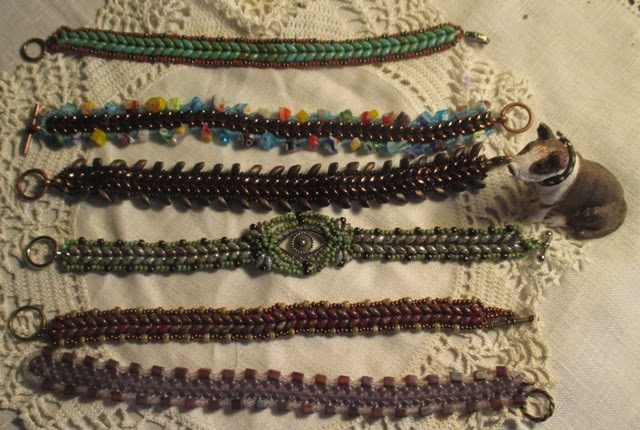 Last year, I discovered super duo beads.  They are beads with two holes.  One at either end of the bead.  So far, I have made some rings and bracelets.

I think that these are going to be another lasting obsession.  Believe it or not, five out of the six bracelets are exactly the same pattern.

The sixth one, with the eye is the same, but I added some fancy work in the center to surround the eye.

The latest fad on You Tube is making Chen Luu bracelets.  There is a famous designer that came up with these.  Everybody and their brother has a You Tube video on how to make them.

The first one at the top is more like what the real ones look like.  The other three are done with what I had on hand at the time.

The real ones come in anything from one to five wraps around the wrist. The third one in this bunch wraps around twice and the knot in the rawhide sits on the front of the bracelet when it is worn. I just ordered more of the leather cording for making these... I can see another rut in the road, coming up fast!

I am going cross eyed from gluing gears on the telescope.  I had to take a break.  Sorry about that.  I will be back to work tomorrow.

Do you wear all of the wonderful jewelry you make?

I either wear it or family members "borrow it". That's with the understanding that it won't be returned...