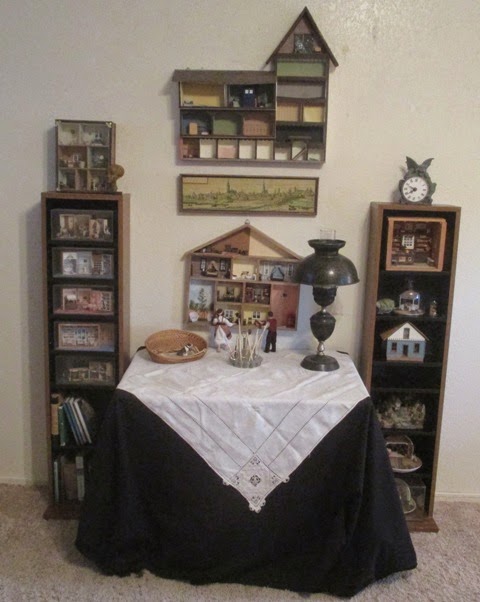 OK... I am finished rearranging things.  At least until I get my workroom cleaned up once again...

So soon we forget.  I almost forgot the little wall house that is hanging center bottom.  I just finished that a few months ago and stuck it in a corner, above the wood box.

It's out now and the Terrible Two have taken possession.. 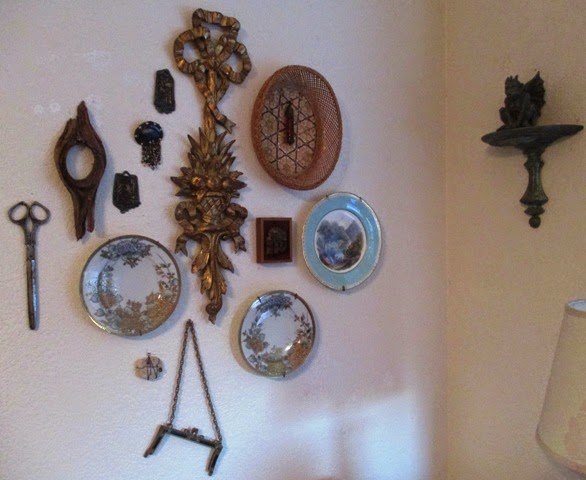 When I moved the 1/4" Tudor wall house, that left an empty wall.

So I filled said wall with a few of my favorite things.

The centerpiece is Italian gold leaf sconce.  I found it in a thrift shop for just a few dollars... The left side tail of the top bow is missing.  I keep meaning to repair it, but somehow it never happens... I kind of like it that way.

I collect antique scissors... Who am I kidding?  I am a scissor addict.  If it cuts with two blades, I collect it.  I represented that with the long bladed library scissors at the left.  It used to be that all of the pages were not necessarily cut when you bought a book.  You needed these scissors handy so that a page could be separated from it's neighbor.

Evidently I am a plate collector and didn't even know it.  These are just three of quite a few that I have around the house.  The two gold ones are antique Japanese and the blue rimmed one is a hand painted lake scene from turn of the last Century England.  It is signed by the painter on the back.

I also collect antique purse frames.  Nope.  Not purses.  Just frames.  A lot of the time, they are much prettier than the purse.  That part wears out.  I like what's left.  Sometimes I will put a new body on a frame. 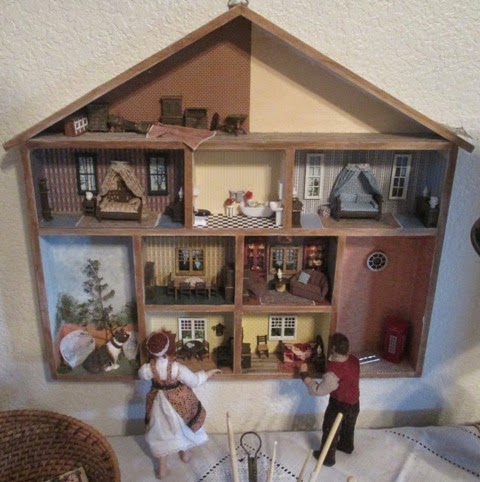 News Flash!  The Terrible Two just announced that the quarter inch section of the wall is theirs.

They are calling it their very own "Mini, Mini Museum.

I can see that this is going to lead to trouble.  They are already rearranging things and are demanding that I refurbish some of the pieces.

I have to admit that, for one, the Neiman-Marcus Cheese Shop is looking a bit bedraggled.  Maybe I will humor them for a couple of days.

If "their" museum is in good repair, maybe they will spend some time there and keep out of my hair.

I have to go see about a cheese shop... Back to work.

See you tomorrow.
Posted by Caseymini at 8:19 AM

Hello Casey,
It really does feel like a museum. So many wonderful projects.
Big hug,
Giac