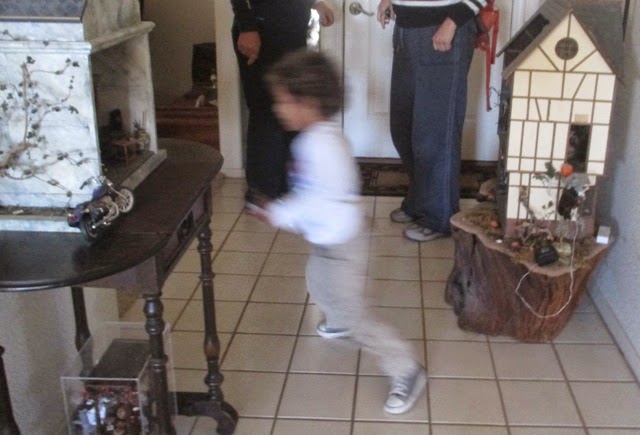 My morning was a blur... April and Amare were here and that kid never stops!  He does everything at a mile a minute pace!  I couldn't even get a photo of him standing still... He, Walter and April are now at the park. Maybe that will slow him down a bit!

The one little table I was referring to in the title is this one.  I am now the proud owner of an Eastlake style plant stand/table.  I found it at Goodwill this morning for a great price and couldn't pass it up.  It is perfect for the music room tower.

When April and Amare arrived, I was rearranging all kinds of furniture.  It was all that little table's fault... It needed a place to live.

It settled into the corner of the front hall and refused to move... Well, in truth, I did try it a couple of other places, but it kept wandering back to the same spot on it's three little legs.

After several other places, it refused to move from this spot.  Here it will stay. 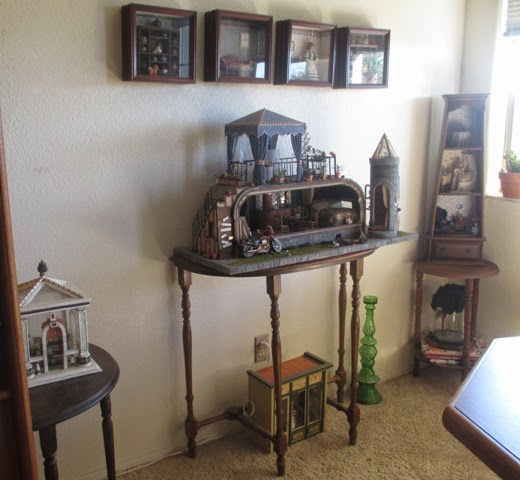 As a result, I had to find a place for the little round table that used to be there.  It landed in the corner of the family room, next to the Tudor Trailer.

Since I decided to put the three shelf unit on top, I had to find a place for the little white pavilion to be.  It got a half table that I wasn't using.

By this time, I had the two shelves that I keep the 1/4" trunks and other small scale scenes standing out in the middle of the family room... 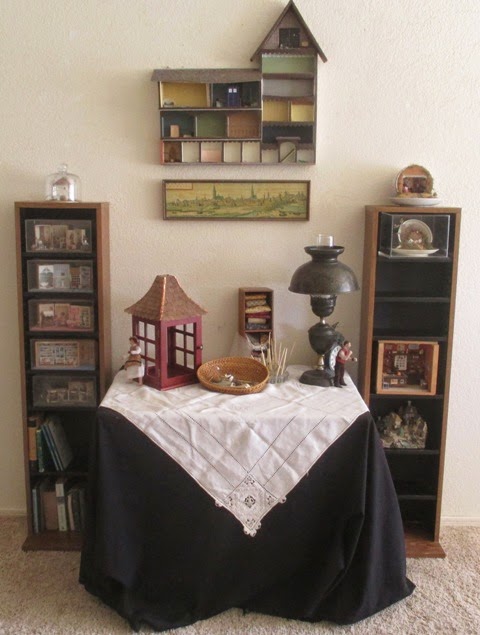 They finally ended up on either side of the table in the bedroom.

I have decided to make this a display for all of the smaller scale items that I have made.

I will probably move the rum box somewhere else.

This could get serious!  Every time I think that I am finished moving things, I displace something else.  Then I have to find a home for whatever I just moved out...

Sooner or later I have to run out of places to move things... I hope.

See you tomorrow.
Posted by Caseymini at 1:22 PM

I have that problem these days... except none of mine are "Finished" houses! And my house is so small... I have not much room to begin with! But that will never mean I have to have fewer mini projects!!!
Amare looks like he is "growing like a weed!"

I'm busy with that exact same thing! Was just wondering this morning whether I need to relinquish some of my treasures to make space for new ones. Seeing your lovely collection I've decided that I just need to move things around until it all fits...

Hello Casey,
Great reworking of your rooms. I hate to be the guy who spoils the party, but knowing you, you will never run out of spots for miniatures,...and if you do you will find a way ;)
Big hug,
Giac

My Aunt Lou always said, you bring one thing in and it disturbs the whole house!
We always find a way, though.