I am amazed at people that will throw a watch away because the battery went dead! All eight of these were in a jar that I bought, not to long ago, at Goodwill. All I did was replace the batteries with ones that I bought at Dollar tree.  Four for a dollar! Every one of them works just fine. Now all I have to do is make them some beaded bands. 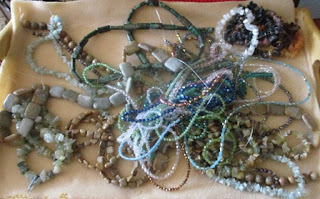 Saturday, we met April, Seth and Amare for a tour around the tents at the ballpark and then to lunch at Michas. It has reopened and we really enjoyed it.

For those of you that don't know, that's our Mexican restaurant of choice here in Tucson. It has been closed for a while.  They had a fire start in the kitchen.  It wiped out the whole restaurant and they had to rebuild the inside. The food is still as good as ever. 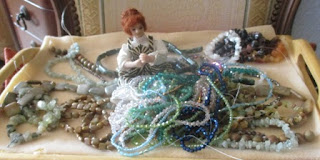 Walter and I went to the ballpark again today.   I grabbed a lot of beads to work with. I got home and sorted the piles out to see what I had...

Then I left the room for a few minutes.  When I got back Tessie was in the middle of the tray.

I will probably have to make her a crystal necklace or two.  But at least I will get most of it.

I am thinking of doing the blog Monday through Friday for a while and see how it works out. Today is Monday... Only four more days to go and then I get two days off.  Maybe.  We shall see.

Posted by Caseymini at 2:22 PM

Hello Casey,
I am glad the restaurant opened again. It is such a disappointment when a place you love closes down.
Big hug
Giac

LOL Good to see you standing up for your own beads. Good idea about changing the watch batteries. Can't wait to see what you do.