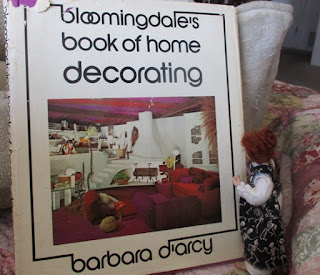 Note to self... Never leave Tessie alone with her favorite decorating book!

We Went to a movie this morning. I should have hid this book! It is Tessie's favorite for décor ideas...It is from the seventies and full of all kinds of weird ideas.

This is the book that I got the idea for Zar's  split level den from.  I should have thrown it out after I finished that one!!! 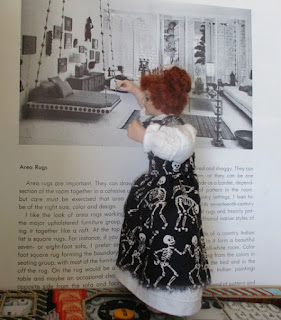 She found the photo of her favorite bed.  When I got home, she announced that it would only take a couple of my necklaces to recreate it...

I have to admit that it would be easier to make than the ones that she wants me to carve for her. Or even the wicker bed that she keeps trying for.

Maybe a hanging bed can't be all bad... 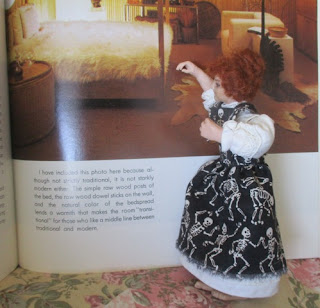 But then she announced that she wants a fur coverlet for it... Not so good. I don't have any fur that I am willing to sacrifice.

She suggested squirrel hunting... I pounded her on the head and told her to get that idea GONE!!!

No squirrel hunting allowed in our back yard!!!

She agreed.  No squirrel should be harmed for a bed...

Then se immediately started rummaging through my closet, in search of fur anything... No luck! 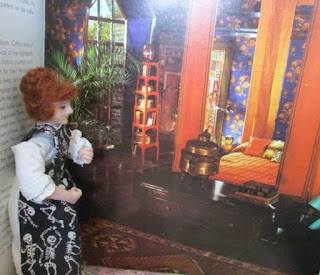 On this page she liked the orange.  I said no!

Then she mentioned the tower in the corner.  I guess that wouldn't be too bad...

She also liked the bell shaped thing by the bed.  I am not even sure what that is, but I am not going to be hammering brass for her. 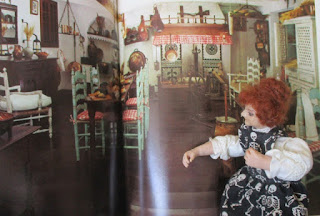 Next, she wanted all of this furniture in the body of the trailer... No... The trailer is NOT that big.

She is going to have to make some choices.  I can wait until she does.

This is going to be one of those projects that she is going to have to eliminate about half of the ideas that she gets.  I am not making twenty chairs for a trailer!!!I am now going to go put some more stones on the outside.

That's bad enough.  Who ever heard of putting stones on the outside of a trailer and turning it into a castle... With a hanging bed??? I am going to go ignore Tessie's suggestions for the rest of the day... See you tomorrow.

Posted by Caseymini at 2:14 PM

Hello Casey,
I must admit, her ideas will make for a very cool interior space. I am glad you are considering the hanging bed. Maybe try using furniture you have to fill the space the way she wants will help her realize it is just too small.
Big hug
Giac

I also have and LOVE that book. When I lived in NYC I could not wait for Bloomingdales to change their furniture displays in the 1970's. They were so innovative. And that's what the book is all about. Tessie has good taste! Like mine! I'm stuck in the 70's. Do a hanging bed!

Looks like she has found a great vintage resource!