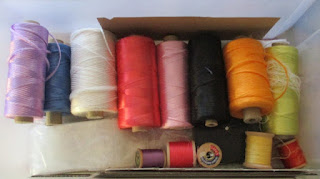 About twenty five or thirty years ago, I bought these eight rolls of fiber at Pic'n'Save.

They were 79 cents a roll and I bought them over a period of time(every time I went there). In those days, 79 cents was pretty expensive for mini supplies... I ran across them when I was cleaning the other day... They are great for making mini tassels.

I took them to the witchy meeting today and gave everyone some of each color. I told them if they used it up they could have more... I made holders for them to wrap the stuff on and then told them that they had to wrap it on the  holder themselves.  I started wrapping it at home and decided that it was going to take  me too long to do it. Thus the self wrapping.

As it was, it still took almost the whole meeting for me just to cut the pieces... I started a pair of socks after the cutting.  I didn't even get a whole row finished... 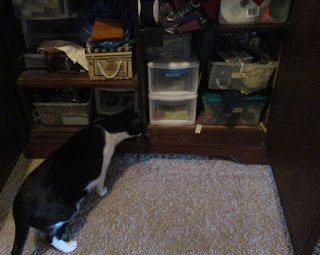 When I got home, I went to put the drawer of stuff back where it belonged and found another cabinet that needs cleaning out... This one is in the living room.

Here we go again.  At least Kota seems interested in helping... Actually, I think he is just hoping that I will clean it out so that he can have another place to take naps...

So much for having the workroom finished! There are other places that keep popping up to be cleaned.

Back to work.  See you tomorrow.
Posted by Caseymini at 7:20 PM