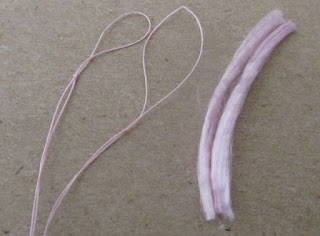 As long as I have been doing this blog, I don't think that I have ever done a tutorial on making tassels. It is about the easiest thing that can be done.

The only thing you have to know is how to tie a slip knot.  That's the same knot that you do when you start crocheting. It's just a loop pulled through another loop in the thread.

Anyway, all you need is two of these and a wad of thread that you want to make the tassel from. 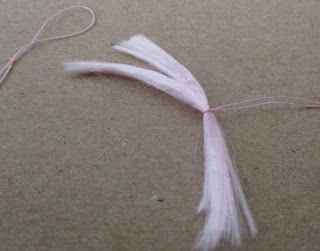 The first thing you do is tie two slip knots on separate pieces of thread.

Then you slip one of the loops over the bundle of threads that you wish to make the tassel out of.

Then you tighten it down in the center of the bundle. Then you pull down the ends of the bundle, so that all of the raw edges are at the bottom and it is doubled at the top. 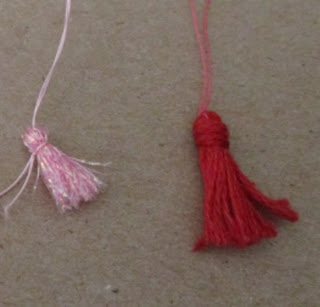 You can make these out of any kind of thread.  Even sewing thread if you have nothing else.

The purple and the first pink one are made out of the stuff that I bought at Pick'n'Save years ago.

The first one in this photo is made out of some fancy decorative thread that I just happened to have on hand.  The red one on the right is plain old embroidery cotton. It needs to have it's ends combed out, but I wanted to show you the way it looks right out of the package.

Anyway, now you can go experiment with whatever thread you happen to have. Good Luck!

See you tomorrow.
Posted by Caseymini at 3:30 PM

I wish I'd known about this when I was making the NOLA House curtains! Would have saved me a lot of trial and error!

Ha, ha! I just took tassels off two old bookmarks I have. Old, meaning I've had them since I was a teenager and that was many many moons ago. I was going to toss them but a little voice said, "Don't." I still have them as an idea for a doll wearing lots of tassels popped into my head and here's your post on tassels. I think that's a sign, or something.

Thanks for the tutorial :)

Thank You Casey! Your tassel tutorial has to be THE BEST one yet and I'm definitely going to have to give it a try! :D