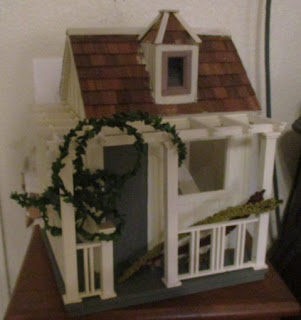 When I got up this morning, Tessie was missing.  She untangled herself and went on her merry way.

I don't think that she is going to get very far on the grape vines.  She simply tangled them around the potting shed.  She left the grapes on the porch.  Then she headed for the hills!

I started looking for her.  I didn't have to look far. 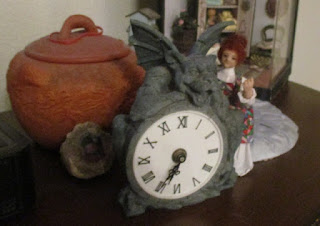 I looked to the right and she was hiding behind the gargoyle  clock.  Not to hard to find.  She was out in the open and more to the side of the clock than behind it.

As soon as I yelled "Tessie!" she disappeared in a puff of smoke! 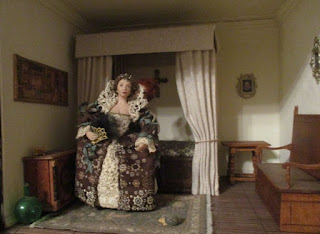 I looked in on several of the room boxes.  She is getting better at hiding. In this one she was hiding behind the Elizabethan lady.  I almost missed her. If she hadn't sneezed, I probably would not have seen her.

She must have told the lady to be quiet.  The sneeze did it.

Again she disappeared. This time in misty cloud of something pink. 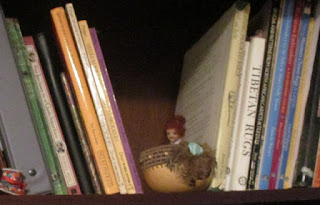 The third time, I almost missed her again.  She was on the top shelf hiding in one of my gourd baskets.  This time her curiosity got the better of her.  She lifted her head and I grabbed her. 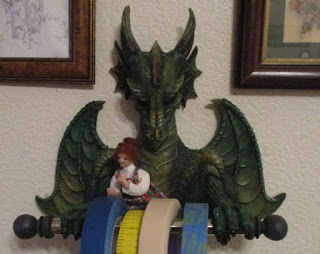 I took her over and sat her on Victor's tape bar. I didn't even try to talk to her. I simply said, "Victor, keep her here until she agrees to finish the vines.

I do believe that was enough to at least keep her out of my way for the rest of the day.

I am doing other things now.  She is stuck.  Victor won't let her go unless she agrees to go work on the grapevines.  He's on my side!

You've gotta love a dragon that likes grapes and wants them to start growing and producing as soon as possible.

I am going to do other things now.  Sooner or later Tessie is going to give in and work on the grapevines. I am through working for the day.

See you tomorrow.
Posted by Caseymini at 7:29 PM

Hello Casey,
I hope Tessie will learn something from all of this. Do you think the vines will ever get done?
Big hug
Giac

Giac, they will only get done if I take over the job! Probably not for a couple of days at least.