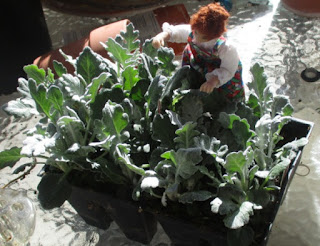 This is the last group of plants that I still have to dig holes for. Tessie is sitting right in the middle of the twelve plants, whining because they have not been planted yet. 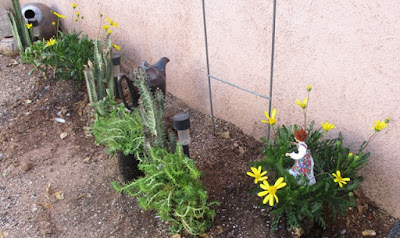 She followed me around as I planted things and whined and whinged about the stuff that I hadn't done yet.

Not a word about how much I accomplished. Most irritating. 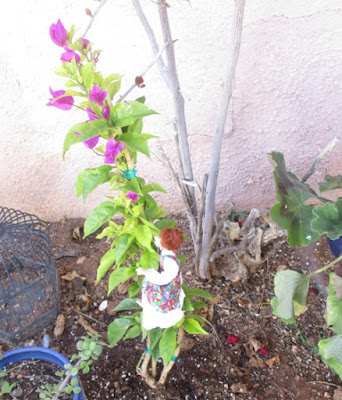 I planted the bougainvillea that I bought yesterday and got a bit of relief.

She played "Jack and the Beanstalk  on that for almost an hour.  That helped.

I still have the twelve little plants still to go.  I don't think that they are going in the ground today.

I don't want to play this game anymore today. 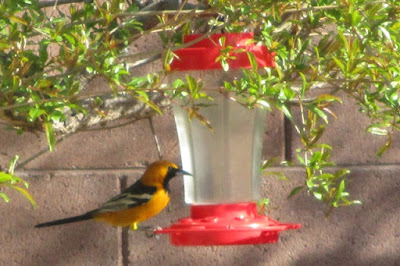 This guy landed on the hummingbird feeder just as I was taking photos.

I think that he wanted to be featured in the blog, so I obliged.

I think that he is an oriole, but not sure if he is one of the famous ones from Baltimore.

He was a nice end to the day of planting.

Back to rescue Tessie from the giant at the top of the bougainvillea.

Back to the yard.

See you tomorrow.
Posted by Caseymini at 4:53 PM

It's so nice to see that you can plant now. I'm so enjoying all the colors and the green. They are predicting a rain/snow mix by the weekend but that could change. It's not spring here yet.