Kota and Me VS Tessie... 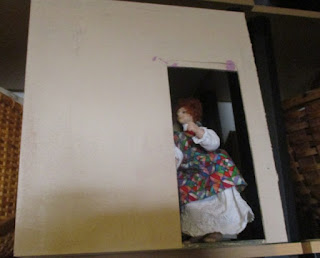 This morning Tessie came to me with one of her propositions, where only she gets the advantage...

She called me into the workroom. I looked up to where her voice was coming from.  She was in the doorway to the box that is designated as hers.

She has changed her mind. It is now to be a Mid Century Mod room box.

She dug out all of the mid century furniture that 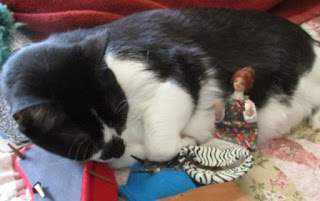 that was in the townhouse.  She now wants a Mid Century Mod Living room.

As soon as she did, Kota laid down on the pile and refused to move.

He wants the box for a bed. 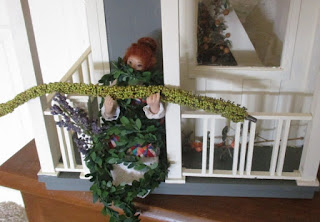 I grabbed Tessie and told her that if she wanted grapes on the potting shed, she should be working on the leaves.

Then I wrapped her up in the leaves and told her to get to work. She is still glairing at me.  Not a happy camper.  She thought that she could get me to work on both at once...

I am not working on either one and at this rate I may just give Kota the box.  At least he is not whinging and whining. 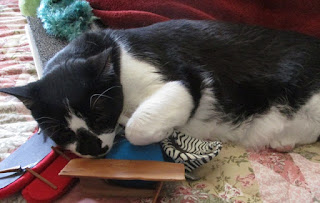 As of this moment, I have gotten a lot done on cleaning up the back porch and NOT doing minis.

The back porch is more important to me.  I want a place to sit outside and work once in a while.

As for Kota, he is happily sleeping on all of Tessie's furniture and not one leg has been fixed.

He's my excuse for not doing a living room for Tessie.  And she is wrapped up in vines and can't even get her mouth open to complain... I wonder what she would do if I told her it was poison ivy?  It's not, but don't tell her that.  I might just use that as an excuse not to do vines. My other excuse  for the living room is, I can't fix the furniture.  Kota needs a place to sleep.  And he found one.

Back to fighting the problem.

See you tomorrow.
Posted by Caseymini at 1:42 PM