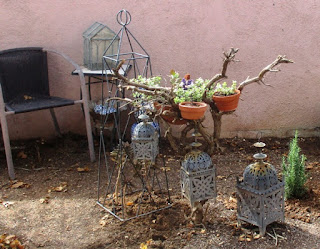 If you look closely, you can see Tessie hiding in the middle pot, behind the plants. I decided to temporarily use the trimmed rosemary plants for a plant stand.

And a place to hang some lanterns.

Tessie immediately decided that this is the place to be in the backyard. 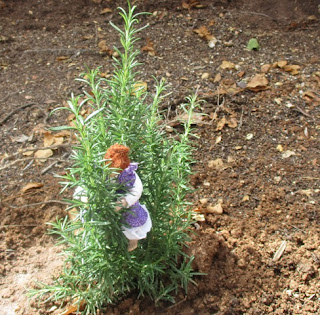 I planted a new rosemary bush.  She hid in there, but it made her sneeze! I doubt if she will stay there long. 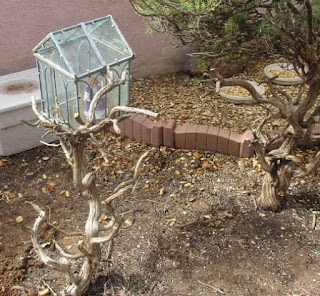 She climbed down and zapped a small greenhouse into the second rosemary bush remains.

Then she managed to zap herself into the greenhouse.

She then announced that she was taking over ALL of the rosemary remains.

She wants more green stuff planted around them and more places for her to stay in them.

I think that I have my work cut out for me. 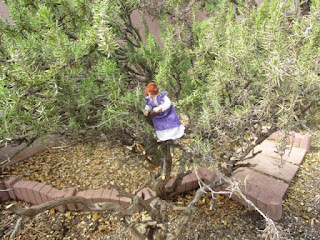 Mind you. I have not even trimmed the dead stuff off of the third one yet... It is not completely dead.

She is looking into putting in a barbeque in this one... I keep trying to explain to her how dangerous that could be.

I am not going to be responsible if she burns the back yard to a crisp!

The first time she tries to light a fire, I am going to be standing by with the hose and she is going to get soaked to the skin!

Meanwhile, I am going to try to figure out something else to put in that bush that she would like...

Something that wouldn't start a forest fire!

I am going back in the house and watch TV. I will try to ignore her and her plans for the future of the garden.

See you tomorrow if the back yard hasn't burned to the ground...
Posted by Caseymini at 1:01 PM