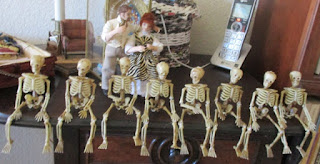 Here they are, in all their glory!  I put Zar and Tessie in charge and left the room... OK.  So I sneaked back and took photos.  Don't tell them.

They had their hands full. 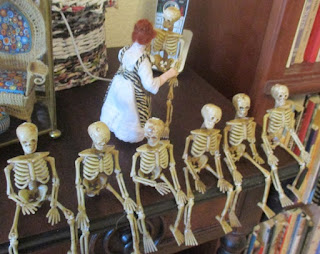 First, Tessie tried to teach one of the males to cha cha.  It was really rough going.  She had a couple of bandaged toes before it was done.

It didn't help that the rest of the skeletons were snickering and making comments. 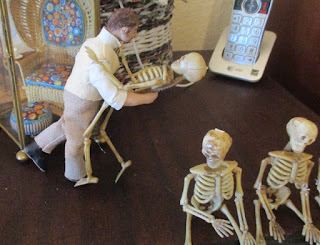 Then Zar took over and tried to teach one of the ladies to "dip".

She kept complaining that her bones hurt. I think that was just because she didn't have anything else left to hurt.

It didn't take long to see that they were not going to co-operate for dancing lessons. 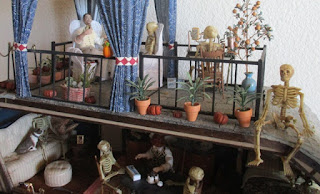 Zar and Tessie bundled them all up and took them to the Clockwork Trailer.

That seemed like a safe place to keep them out of the way, until Halloween.

Zar got three of them up on the roof.  It seems that one was a rock star in a former life... He grabbed the chance to play the Steampunk organ.

Another just wanted to sit and chat with Zar about what was happening since he left the world.

The third one just wanted to stop and smell the roses... 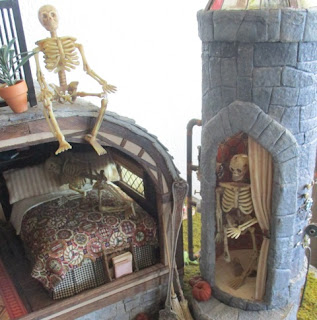 Tessie  entertained a couple of them by explaining what had happened in the food world since they left.  No Scooter Pies where they were from.

Another just sat on the couch petting Spike and enjoyed being back in real life, if only for a little while.


We already discussed the guy on the roof.  "Smelling the roses.".

The other two were more original.  One just crawled onto Zar's bed and started snoring to beat the band.

And the last one, swore that he hadn't had a shower or a bath in over a hundred years...

He smelled like it was more than a century, for sure!

By the time he got out, his bones were starting to melt from all of the wet and heat.  We are going to have to get him dried out before Halloween!

Anyway.... I doubt that any of them are going to be doing much dancing. All eight have better things to do now.

How fun, this really makes me laugh ! Can t wait to hear more about the skeletons.

They look so creepy but fun and cute too ♥

Hello Casey,
What a fun post to start me day!
Big hug
Giac