This is the Last Time... 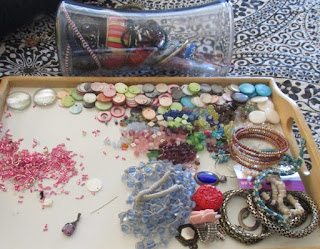 Tomorrow I am going back to minis!  I promise.

But today I had to show you what I bought.

I got the vase in the background, filled with beads and jewelry at Goodwill this morning.

I am saving what I want and taking the rest to the Witches' meeting Wednesday.

Most of it will disappear, without a trace. 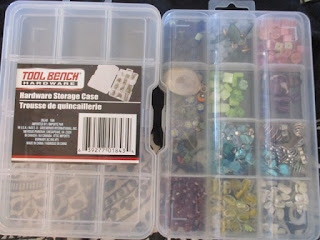 Before going to Goodwill, I stopped at Dollar Tree.

I found these little plastic storage cases in the tool section... They may have been there before, but I overlooked them.

They are the kind that have the ridges in the lid on either side of the compartments.  They are great for storing small beads, because the beads can't escape to neighboring compartments.  I immediately used one for some of the new beads. 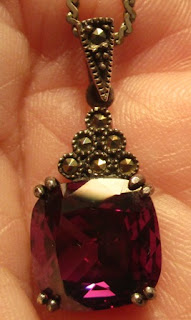 Down at the bottom of the vase, I found this!

Years ago, someone brought me back some really nice jewelry from Thailand. They make wonderful things.

I had a couple of rings.  One with Opals and one with tiny amethysts. They were set in gold. April absconded with them a few years back.

This looks to me like an amethyst. It is set in silver.  The information stamped into the back just says Thailand and the initials NF and a number.

I doubt that they would set fake pieces in Silver. Who knows?  Maybe they do, but even if it is fake, I like it a lot and probably the silver in it is worth the seven dollars that I paid for the jar.

I need to take it to someone and have it checked out, but... 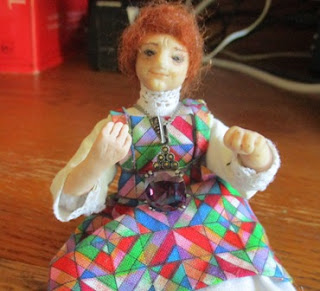 First I have to get it back from Tessie.  She says that it matches her apron.

I don't know what happened when I took the photo.  The light must have been reflecting back.  The first photo of it is the real color!

She can just barely hold her head up with it on... I don't think that she will be hard to catch this time!

Back to the chase!

See you  tomorrow.
Posted by Caseymini at 12:02 PM

Ooh that s a real treasure ! And I see that Tessie loves treasures too ;)

If I used those little plastic storage cases, the first time I opened them, all the tiny beads would jump ship.

Great find, even if it is not real! I once found 3 fresh water pearls in a jar of mixed beads I bought at a thrift store. Not real expensive but they were real natural pearls.