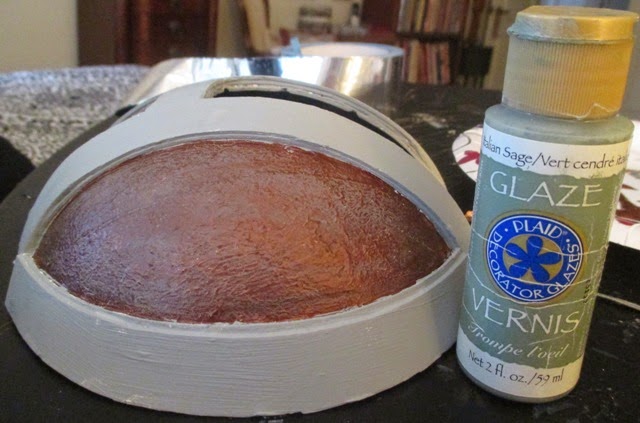 This morning I started painting the dome.  I did the insets with Antique Copper. The frame is Quaker Gray.

Then I dug around and found this glaze that Plaid used to put out, about a million years ago.  I don't know if they still make it.

I just happened to have it in a nice green color that ages copper quite nicely. 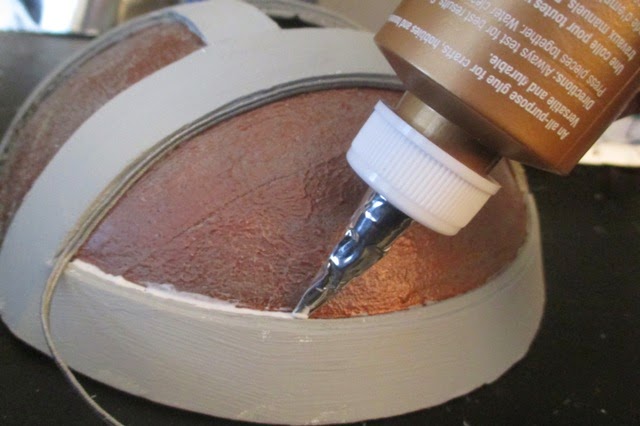 I colored a few yards of soutash braid with a silver permanent Sharpie marker. Then I went around the edges and center of all of the  frame pieces.

The thank you Aleene in the title is for the one of glue fame.  A long time ago she showed on TV how to make a fine point on her glue bottles with a piece of scotch tape.  I was too lazy to go get the scotch tape, so I used the metallic tape that I had at hand.

It worked out pretty well.  It wasn't all as sloppy as the photo.  I was trying to put on glue with one hand and take a photo with the other... So much for that idea. 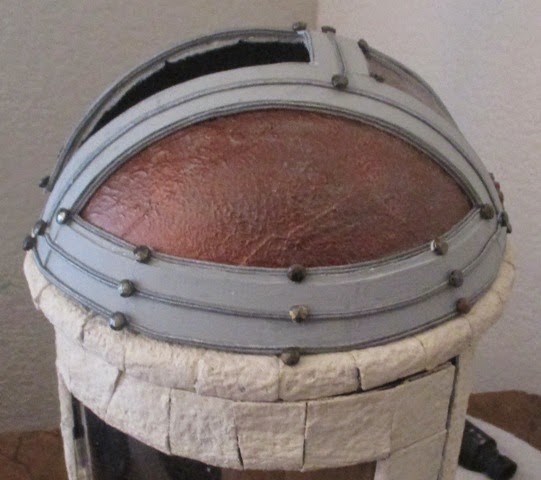 After I got the soutash in place, I went and found some antique, flat glass beads that I had in my stash.  They are metal coated. I have had them for about 30 years and decided that it was time to use them.

I noticed that the row down the center is not quite straight.  I'm going to have to fix that.

Anyway, the dome is far from finished, but I thought that you would like a peek.

For some reason, the paint that I put on the stones yesterday, doesn't show up at all in this photo.  I guess I am going to have to put on a second coat and do some more defining of the rock edges at the same time..

Oops!  I see a spot that I missed with the beads.  Gotta go fix it!

Back to work.  See you tomorrow.

Hi Casey
This is coming along brilliantly. I believe if you keep something long enough you will use it....my hubby doesn't believe this!! I am a keeper, he throws everything out :)
All the best
Vivian

Hello Casey,
I am always impressed by the shapes of your structures. The detail is fantastic!
Big hug,
Giac