Sailor's delight.  I always wondered if that meant that there were going to be no storms if this happened.  Actually, we had some pretty icky ones a few days ago.  Now there is not a cloud in the sky. 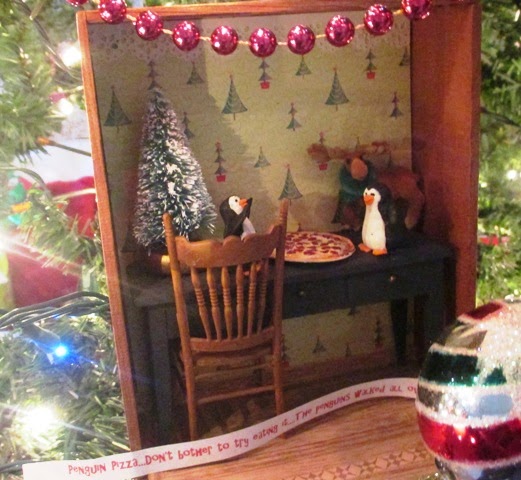 I broke down and put a couple of the little boxes in the tree this morning... The penguins insisted upon their pizza.  As soon as I put it in, they started stomping across it.  That is to insure that nobody else will want to eat it.  Thus the sign at the bottom. 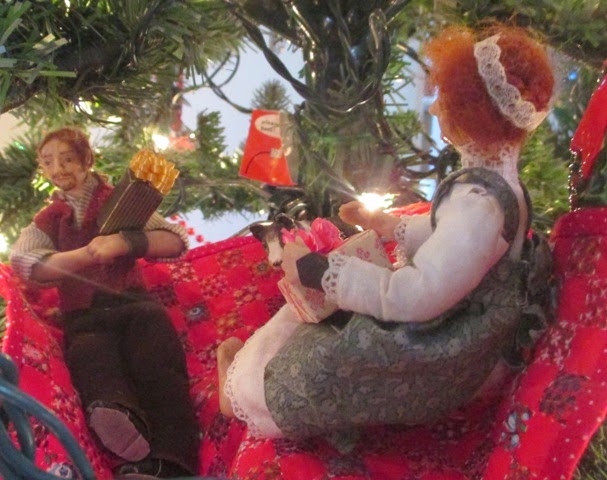 As soon as the Terrible Two saw what I was doing, I saw them headed for the other side of the tree with Tessie's favorite quilt.

I didn't attempt to put their hideaway in first so they took it upon themselves to remedy the situation... They both grabbed a present from the stash in front of Zar's Tudor Trailer and made themselves comfortable... I think that they have been peaking... Zar snatched up one that contains a bottle of his favorite brandy and Tessie grabbed one that has a new never ending cake inside.

They are holding the gifts hostage, until I finish baking cookies.  I tried to talk them into the fudge that I made first, but they both insisted that fudge doesn't work for ransoms.

I guess that means that I had better get off of the computer and make cookies.  No rest for the wicked...

See you tomorrow.
Posted by Caseymini at 10:30 AM

Merry Christmas and a terrific new year to you alla
Hugs, Rosanna