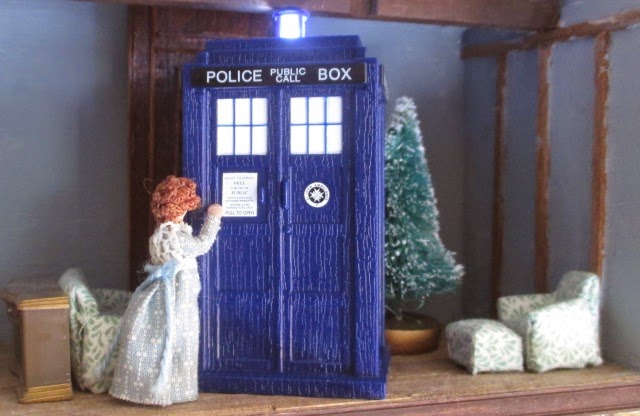 I didn't tell you that a working 1/4" scale Tardis landed in the living room of the Tudor Wall House on Christmas Day... Mini mini Tessie has been banging on the door and yelling.  She wants to go somewhere... Anywhere... Just so she can say she has traveled with Doctor Who... 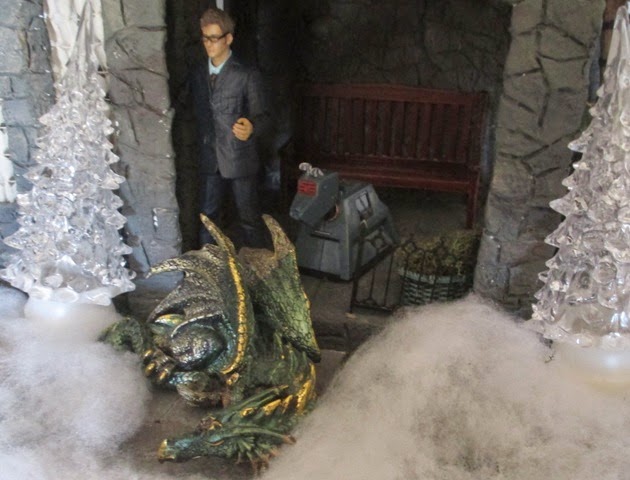 Speaking of which, K-9 the talking robot dog from some of the episodes arrived on Christmas too.  I think that April is trying to tell me something... She is a Doctor Who fan... 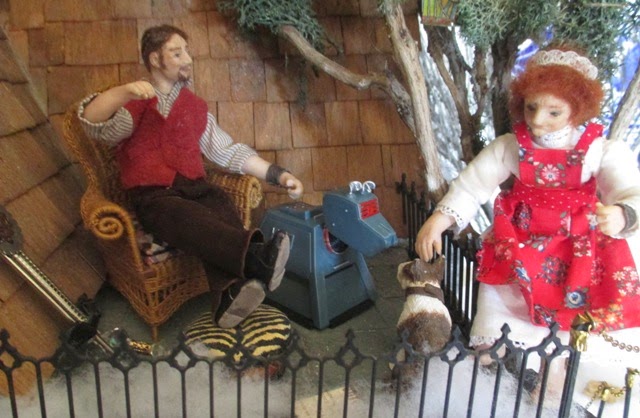 K-9 almost got into it with Spike.  The Terrible Two had to hold them back.  I think that Doctor Who and K-9 are going to have to find a nice peaceful place to be until I can provide them with a setting... Both are troublemakers. 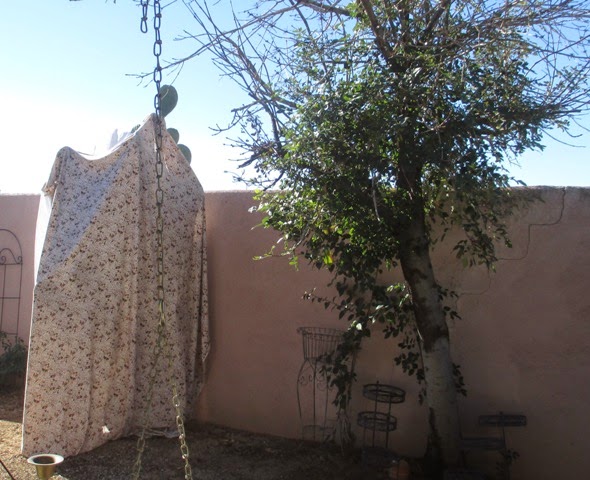 Meanwhile, real life in AZ.  We are having a cold spell for the next three days.  I took in all of the plants, in pots, that were on the patio.  My family room looks like a botanical garden right now.

I couldn't take in everything.  I had to cover some of the plants outside.

One is the Burbank prickly pear that lives by our back fence.  We lost a few branches from it last year.  The tree beside it is just coming back, somewhat, from two years ago.  Our plants are not happy campers when it freezes more than one night in a row.

I couldn't reach the very top of Mr. Burbank, so he may loose a pad.  Hey! He's eight feet tall and still growing.  I want to keep him healthy.  It started with a couple of pads from April and Seth's plant.  They have a couple that are higher than their house! I imagine that those were planted many years ago... Their house was built in the late 1920s.

Anyway, I think that it's just about time to get back to mini-ing.  I have been fooling around long enough.

See you tomorrow.
Posted by Caseymini at 10:41 AM

Good Morning, Hope your very large cactus survived. I am fanatic about pampering my plants however this year my family think I've gone over the top as I race out and put a wool blanket on the bee hive if the temperature hits freezing.
I just hope I can get them through the winter.
Enjoy watching your blog.
Have a happy holiday.
regards Janine of Minworks

Hello from Spain: I read that your city are suffering a cold snap. Much encouragement. I really like your furniture. Great photos. Very real. Happy New Year. Keep in touch

It,s been very cold here too and our furnace went out yesterday so we are using space heaters to keep warm the cats hate it but the dogs don't mind at all :-)

I have been trying to keep K-9 and Spike apart all day. They don't seem to get along! The Tardis fits right in though. Thanks for them both, April!