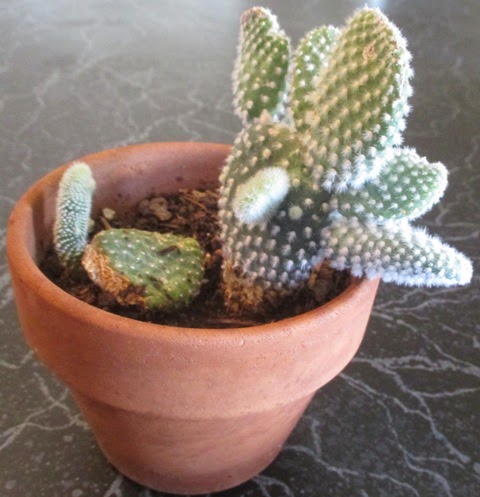 What do you do when a very small prickly pear cactus loses a limb?

You leave it alone... I know it sounds cruel, but it's a good thing.  Not bad.

I left it alone for a couple of months and then went back...  It had a baby!

If you want new prickly pears, you simply knock off one of the pads.  Then you let it alone until it callouses over the break.  Then you wait... and wait...

This is what happens. 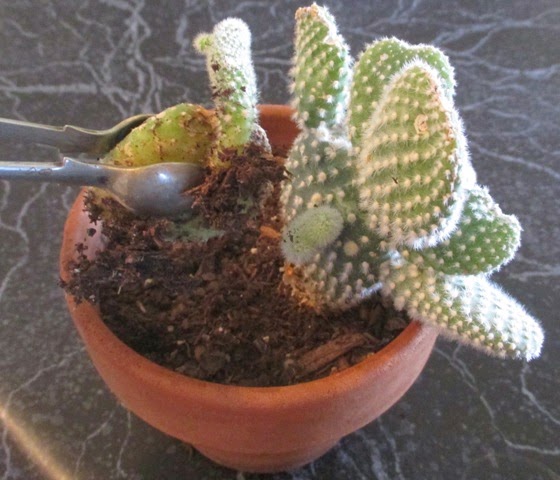 It grows a new plant.  Theoretically, I could have six new plants off of this one.... But the original plant wouldn't look too good.

As you can see, the original pad has developed roots.  The baby has also grown feet.

I carefully sliced into the large pad and released the baby... Then I planted him in a pot, with soil from the pot he was in. I will put the pad back in the soil.  It will also be a new plant.

The little one now has a home of his own. 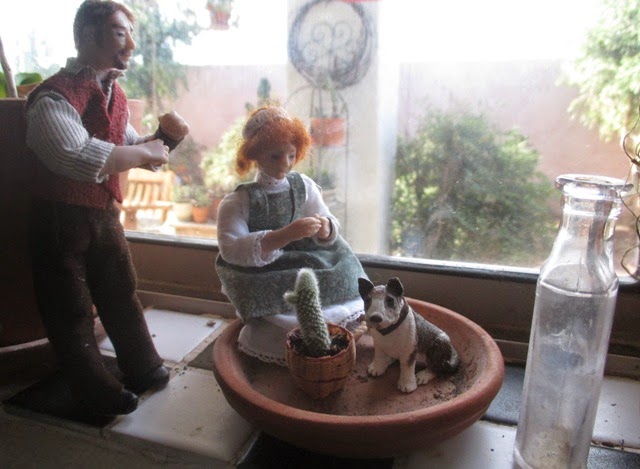 He will live on the kitchen window sill for a couple of weeks to get housebroken.

Visiting hours are all the daylight hours.  The Terrible Two plus One will likely keep him company.

Tessie keeps tickling him under the chin and calling him "Oscar".  She says that he reminds her of Oscar the Grouch.

Zar and Spike know better than to try to talk her out of it.  It is better to humor her than to try to get her to stop talking to her pet cactus. Especially since there are a lot of prickly spines involved... She will tire of it quickly.  Just another phase...

See you tomorrow.
Posted by Caseymini at 10:31 AM

Heeheehee...... "housebroken"...... you just gave me the giggles, Casey! My golden retriever once chewed up a single yucca plant's stem. I stuck it back in the ground and the stem made 8 new baby plants. Doggy gardening skills are sometimes surprisingly good!

Hi Casey! Learning this about how to propagate a prickly pear cactus was very interesting. I never knew before, but now I do! Seeing Zar, Spike and Tessie, all sitting around it and watching it grow, makes me chuckle.
And Daisy's house is certainly coming along. It has such a cosy feel to it and I just know that she will LOVE IT! :D

For goodness sake, Lené, don't tell widget that! He will want to add gardening to he's list of things to do!

Elizabeth, you can do that with most cacti and succulents. Very easy.