The feud continues. This morning Zar pleaded with me to make him a spray bottle that would fit his hand. He was having difficulties with mine. He specified that it should be the same color as mine. He liked that part. However, being a staunch Techno-Victorian, he wanted one with a metal sprayer. None of this silly plastic stuff for him. He is getting as bad as Tessie. He followed me around repeating "Casey.....Casey.....Casey" with about 5 seconds in between each one. He kept it up until I gave in and tried to help.

Do you have any old gel pens, preferably, or ball points laying around doing nothing? I was sitting at this desk the other day reading something on the screen and saw one in the flower frog on the side of the desk. I couldn't resist. The six year old started taking one apart. I untwisted the writing end. It was a perfect size and shape for a bottle.

A little side bar here....Did you know that the clear barrels on some of them can be used to store parts? The pink and blue one in the photo both have two ends that screw off. The top end is solid and the bottom end has a small hole in the screw part to accommodate the pen point. The hole can be sealed with a drop of glue. T 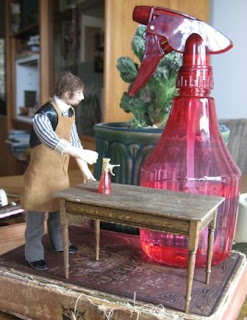 hen you can just screw off the top and put tiny things inside. Since they are see through you can easily tell what you have stored in there. The screw top can also be used for a plastic drinking cup. Some of the tops are like a little plug and have to be pried out. They aren't as easy to work with.
OK. Back to the subject at hand. Some of the pens have a clear screw off end on the writing part. Some are molded in one piece and you have to cut them off. The one that I made Zar's bottle from was the kind that just screws off. No fuss, no muss. I simply took a tube filigree finding that could be pried apart at the seam and forced it open. then I took parts that I clipped out of earring backs and made the trigger and barrel. Last, I glued a watch stem on top for the cap. It was about 10 minute's work including finding the glue, needle nose pliers and the side cutters.
That worked so well that I started messing with parts of the pens that you see on the table, 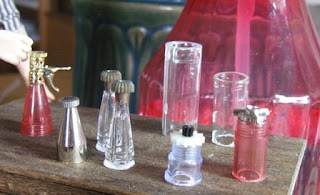 excluding the whole green one. This is what I found in them. Zar now has several bottles, a couple of beakers and two jars.. I used various watch parts and the rose colored jar has a top made from a hubcap from a model car. I need to put bottoms in them all, but that will be simple with some transparency plastic. Some of the pieces had to be sawed with my miter box to get a straight cut. I used good old E-6000 to put everything together.
Now about the spray bottle war......It seems that Zar couldn't find Tessie. So he confiscated her rubber chicken and threatened to pickle it. It is now in a jar on the table. He thinks that Tessie will come to it's rescue ant he will be able to blast her. 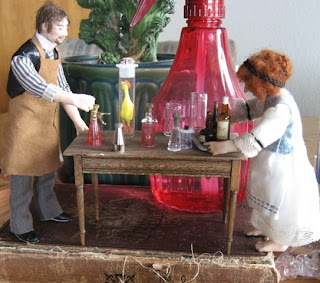 We all know that Tessie is always two steps ahead. I left Zar's drink tray in the bedroom the other day when I was working on the secret room. Tessie found it and is threatening to pour it all down the drain if he touches a feather on her chicken's body. Never mind that the chicken doesn't have feathers. She wants her chicken back.....and Zar has to empty the spray bottle before she will give the drink tray back to him.
I think that Tessie won this round. We all know that Zar always needs a wee bit of whiskey after a tussle with Tessie.
I am going away now and let them fight it out on their own. May the best witch win......
See you tomorrow.
Posted by Caseymini at 11:50 AM

I love the way you think. The 6 years old has a brilliant brain. Please never let her grow old.PS I forgot, tell April that the chicken is wonderful! Tessie already knows it

What Zar does not realize is that rubber chicken is actually a "bullet" used in the "Chicken Chucker". You can buy a bag of 144 of those little chicken bullets from Archie McPhees in Seattle. Now he just needs to create a steam powered chicken launcher.

Thanks for the idea Karin,but I am not sure that I want to pay almost 40.00 for a gross of mini chickens!ROFLOL Thanks for the site too. Very interesting!

Amazing....you have no idea how many of these pens I have tossed in the trash because they have failed to write....

This post sent me on a trip down memory lane. I had a middle school friend who used to take pens apart all the time. He had an arsenal of pens he'd converted into stealth spitball guns, but he also folded me a few pieces of miniature origami from a half inch square of paper. The "Chicken Chucker" made me laugh out loud remembering my middle school gym teacher who was obsessed with rubber chickens.

Hmm... finally a use for all the pen bits my mother saves for me thinking I will figure out a mini use for them. Thanks, Casey! :-)

Oh I just love reading your blog! Amazing life you've got with your tiny personalities. The spray-can is absolutely lovely. Thank you for the great ideas!