Not So Easy Basket

I am still mucking out the workroom. You all get to do a course in underwater basket weaving while I work. Just kidding about the underwater part. That was supposedly the easiest art course for football players to pass when I was in college. I am not sure why.....


Anyway, this is the next step up in basket weaving. It is called twining. You are working with a double thread. I know that sounds complicated, but once you get the hang of it, it is easier than regular weaving.

I have known how to twine for a long time. Yup, that college course in underwater basket weaving was the place I learned.
A friend of mine was weaving baskets from the center bottom out. That was way more work than I wanted to do. I hate weaving bottoms. It seems to me that it is a lot of extra work that is never going to be seen. So I took the infamous Woodsies and used them for bottoms again.
You will need Woodsies for the base, the cheapest poster board that you can find( the finish on it is almost not there), and some waxed linen. I get the waxed linen in the craft dept. of Wal Mart. I get the cheap poster board at Big Lots. The Woodsies are at Michael's or one of the other craft stores.

Oh! I forgot.....White glue and scissors. That's basically it.
You cut the poster board in 1/8" strips. It saves a lot of time if you have a strip cutter from Micro Mark. If you don't you can cut them with a paper cutter or even a pair of scissors if you have a steady hand.
As you can see from the photo, you glue as many pieces of poster board to the edge of the Woodsie as you can with a tiny gap in between each to allow for the weavers. You will need an even number of weavers if you do any poster board rounds.
After you finish those, you glue a band around the bottom to stabilize and let it dry.
Cut about 2 yards of the waxed linen and fold it in half. The last sample in the above photo shows the fold pulled down over one of the spokes. I take the weaver farthest to the left and bring it up and over the right one. Then it goes behind the next spoke and back to the front.
In the next photo, you will see that I am working from left to right. 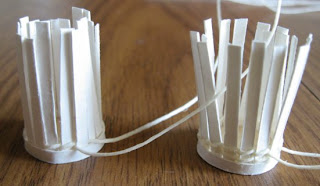 The weaver that you are going to use next is always the one on the left. It always wraps in front of the spoke that the last weaver just went behind. Then it goes behind the next spoke and out to the front again. You should always have two weaver showing on the outside of the basket when you finish a step.

You just keep alternating the thread. When you get back around where you started you just continue on. You can do this as many times as you want. It all depends on how high you want the basket.
In the third photo you will see that I added a row of poster board here and there. 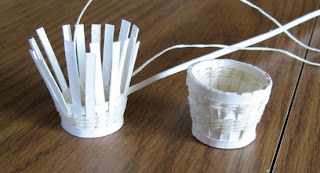 There are no rules as to how many rows of linen and poster board you can add. Go crazy! Play with it.

The poster board has to be glued and cut at the start and finish of each row. Unlike real reed, it can't be bent to go to the next row up. Tuck the linen weavers to the back, don't cut and simply glue the start of the poster board behind one of the spokes. Weave around cut it off and glue the end inside. Then pick up the linen weavers from the inside of the basket and continue the next row.

When you get the basket as high as you would like it, glue a strip of poster board on the outside and one on the inside as a rim 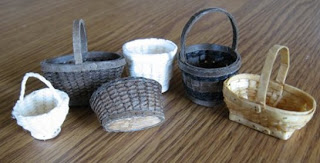 .
From left to right.....White basket totally twined linen with a twisted linen handle. Brown basket behind it is totally twined with a double layer of poster board glued inside for the handle. The one laying on its side is to show you that you can use an oval Woodsie to get a different shape. That one has two pieces of linen twisted as edging. The white one is the one in the photo above. The next brown one is a combination of twining and poster board. The last one is on a rectangular base and just pulled into the oval shape while weaving.

The color that you see in these baskets is the result of dipping them in Minwax stain after the weaving is complete. The darker ones were dipped in "Dark Walnut" The lighter one is "Early American". You don't have to go out and buy different colors of waxed linen to make the different colors of baskets.
I imagine that you could also paint them if you wanted something like an Easter basket.

Now I am going back to sorting. Happy underwater basket weaving to you all!
See you tomorrow!

Now Casey, if you keep taking breaks from cleaning the work room to show us fun techniques like basket weaving, you'll never get it picked up!!! Seriously, cute baskets; thanks for showing us.

Hi Casey,
what a nice tutorial. May I use a photo for my "link of the day" on my blog?
http://andrea-thieck-miniatures.blogspot.com/
Have a wonderful day
Andrea

Love the light basket on the right! It is gorgeous.
Miniature greetings