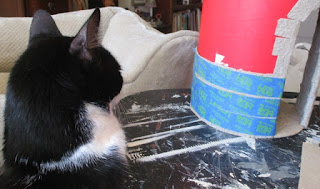 It helps to hire a supervisor before starting any project.

Kota volunteered, so he was hired on the spot!

Of course it didn't help that the other one that likes to boss me around  didn't show until much later. I had a doctor's appointment this morning, so I got a late start on the rock work. Nothing to worry about, simply checking to see that everything is OK.

Here is the method to my madness. I start at one of the doors and work around to the other side.

In this case I was starting at the side of the front door and working around to the side of the other door that goes into the living room. I have already done the space between the doors.

See all of that blue tape? That is what holds everything together until the glue dries.

I just keep putting new pieces of stone on and then running the tape over it. 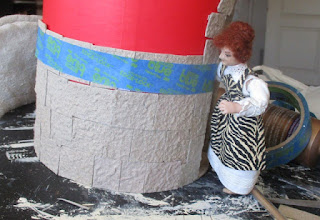 When I get to the side of the second door, I simply wrap the tape to the inside and tear it off.

Tessie finally showed up after I had finished four rows.  I had already taken the bottom three rows of tape off.

I am not sure that she approves, but since she is not in charge of supervision, I don't think that it is going to make a whole lot of difference.

Kota approves. I gave him a handful of Kitty treats and he thinks everything is just dandy!

Back to work.  See you tomorrow.
Posted by Caseymini at 2:42 PM