Tessie Works to Get What She Wants! 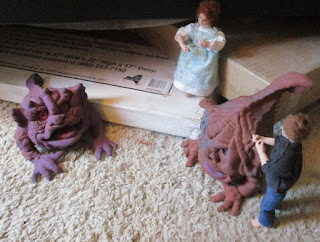 She may be working, but I do believe she has met her match.  I built some of my smarts into Letty.

First Tessie tried introducing Letty to the two wood eating gremlins that live under the bed. 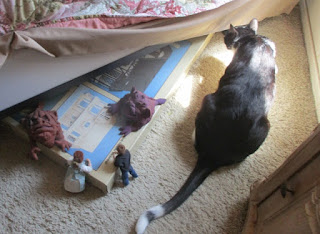 The first house that Tessie showed Letty was the very largest.  The Harrison. She tried to talk Letty into sharing the house... Telling her that it would be great fun to be roommates....That would 't last long.  Tessie would figure out a way to keep the house and throw out the roommate after a week.

I do believe that Letty has experience in this particular ploy.  She immediately wanted to see something smaller..."Just for her". 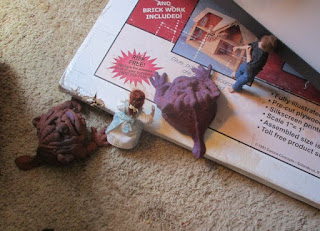 They went to the other side of the bed and looked at the Magnolia.  A one bedroom and bath.  Basically a four room house, too small to share...

I do believe that Letty knows what is going on.  Tessie just wants a new house for herself.

She turned to me and asked if I had anything else...

The only other thing that I had that was a one person place is the other travel trailer kit that I have, like Zar's. 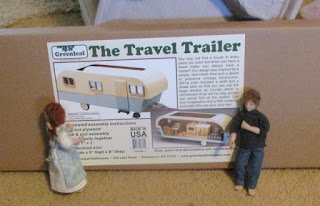 She asked to see that.  I think that, if that is the only way that she can get rid of the roommate that is what she will do... I know that's what I would do, if need be...

Later, she took me aside and asked if she could have the Magnolia, sans roommate.

I waited until Tessie was out of earshot and told Letty, "If that's what you want, you shall have it.

I think that it the best way to handle it.  Tessie has been pestering me for the travel trailer since Zar's has been finished.  She wants one in the worst way... Of course, as soon as I finish the Magnolia for Letty, she will want one of those too... The catch being, I don't have another kit for that house.  She will be settling for the trailer instead.

Back to work. See you tomorrow.
Posted by Caseymini at 2:49 PM

Bravo Lettie. She is one smart cookie. I wonder how Tessie will react when she realizes that Lettie is on to her...
Big hug
Giac