Stones to Work With! 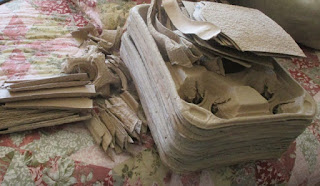 There are still seventeen trays left to cut apart.  I have seven done... I think that took about an hour. Now that I have figured out what parts I am using and where to cut them apart, the rest should go pretty fast... I hope... 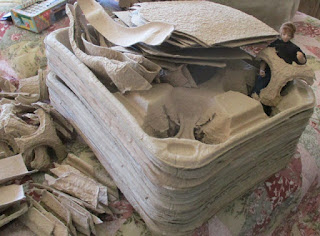 Letty pulled out this part of the cup holder and told me that it would it would make some  interesting  decorative stone work...  I think that she is going to have to draw me a picture. I am not sure what she has in mind.

So far, I have only gotten to the part where I cover most of the trailer and the tower with stone. The fancy stuff will come later.

She has been keeping me company and putting the parts in piles of each kind... 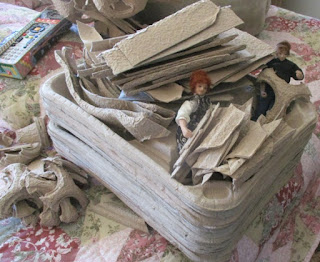 Tessie just showed up a little while ago and grabbed onto the pieces that she has on her lap. It's a good thing that they aren't really stone! I would be digging her out and mending bones!

I think I probably have enough to cover the trailer and then some... I may go as far as ten. Then I am going to start building.

I am trying to decide whether I want a slate roof or a shingle.  I may have to try a little of each and see which one looks best with the stone.

Letty will have the final say, but I am leaning towards the slate.

Back to work! See you tomorrow.
Posted by Caseymini at 1:06 PM

I too wonder what Letty means. I hope you figure it out!

Hello Casey,
I cannot wait to see it come together.
I hope you don't mind a question: I will eventually have to start making the red brick exterior for my manor...soooo many bricks... and was considering making them out of egg cartons. Any thoughts? I know you make stone out of them, but I think they might have a good texture for bricks also. Any other suggestions?
Big hug
Giac

Giac, I think that of the red bricks I have done, the ones that I like best are on " The Rusty Nquilt shop. Believe it or not, those are made from some old file folders that I bought at a thrift shop. The inside and outside of them were different shades of reddish brown. Great variation. I wish that I could find more. So far, no luck. You didn't say what kind of brick you are trying to reproduce. I think that you might try looking at paper in an art supply store. Sometimes they have papers that are just right for something like bricks. Good Luck!

That was "The Rusty Needle" oops!