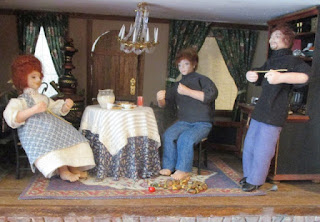 OK Tessie is still yammering about wanting new hair.  Not so formal for working.  She still likes her white dress and aprons though.

Zar got second place in the draw and Tessie got third.

They all immediately wanted to start unpacking the trailer.  That's what Letty picked. 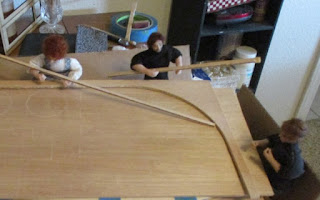 I can do Tessie's hair anytime that we have a few minutes to spare, so they decided to start unpacking the trailer right away...  The three of them managed to get the box back on the table bribing me.  That was easier for me to carry than the three of them combined.  I did it in a matter of minutes.

I had visions of them hauling it through the house with a variety of ropes and other paraphernalia. It was just easier to do it myself. 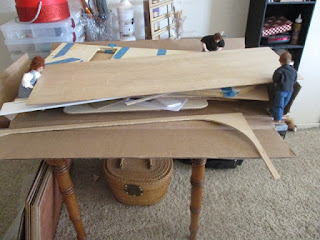 I got it on the work table and they sent me away. I peaked in a few minutes later and found that their idea of unpacking was to take the pieces, one at a time and shove them off of the table...

Whatever works! Now all of the pieces are on the floor in a big pile. No pieces labeled. No pieces sorted.  Just a BIG pile!!!

I am going to leave it until tomorrow morning.  Then I will start sorting and making things right.

For tonight. they can stay where they are.

See you tomorrow.
Posted by Caseymini at 7:18 PM

Hello Casey,
I hope the good will and helping each other spirit lasts for a long while.
Big hug
Giac