Let's Get This Show On The Road!!! 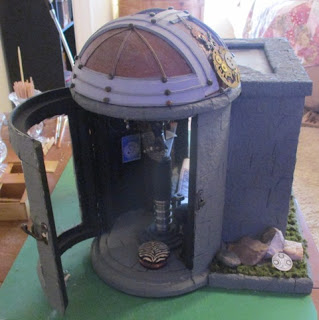 OK. I am ready for a new adventure. The only trouble is, the Terrible Two plus One are also ready to go.

I cleaned off the work table in the bedroom a while ago and went and got the observatory and library.

Guess who followed me into the bedroom? Yup. The Terrible Two plus Spike. Spike is probably worse than the other two combined.  He will chew on anything that isn't fastened down.

The other two, not so much.  If it isn't food and doesn't taste good, they leave it alone. 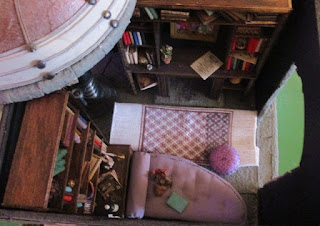 I forgot that I started another rug to go with the color scheme when I switched from turquoise to lavender for Daisy.

She likes this color scheme better, but.... So does Tessie.

I have the feeling that the library is going to be put to good use when Daisy isn't at home... 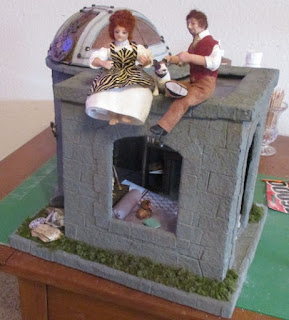 Tessie has already put quite a few cupcakes in the freezer, so that as soon as Daisy gets in the time machine, she can move right in!

Of course, Zar has plans for the telescope. He has it pointed at the north star and ready to go.

I tattled on the three of them and Daisy is making plans to stay a while and enjoy her new house as soon as it is finished.

She is already planning the housewarming.  She tells me that you are all invited to join the party when that happens!

I have to go throw out the Terrible Two plus One now. Then I will start work on Daisy's new rug now.

Posted by Caseymini at 1:00 PM