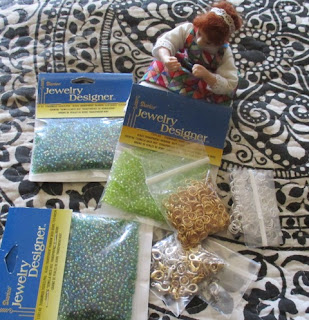 Well... It's a version of that thought.

Barb started it by bringing a box of things that she thought that others might be able to use... They were no longer of use to her.

I added to that box, as did several others.

Then Joan moved and cleaned out.  She had all kinds of stuff to share.

I kept most of it at my house for a few months... Then I got tired of it.

I asked before I threw out,  but nobody wanted what was left.  So the pile left. 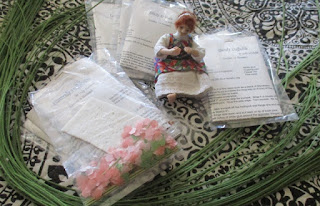 It seems to have caught on as a way to clean out.

Judy gave me these kits and wire.  I provided some things for her new Chinese Room box.

This week Jeannie brought some stuff.  That included the beads that Tessie is sorting through in the first photo.

Everyone took what they wanted.

I brought a pile of wallpaper and again a lot was taken home by others.

I didn't want to cart it home, so I just told Susan and Judy to pitch what they didn't want.

Joan brought a small case that holds six of these plastic thingies.  Jeannie took it and I told her that I would bring her the container to go inside.

Maybe someone else will want the rest if she doesn't want them.  I realized that they were too small to hold everything that I have in the way of jewelry findings.

You are asking why am I telling you all of this?  Because, if you belong to a group that meets regularly, or even irregularly, take along what you don't want.  Maybe you can get something like this going.

We are having a great time taking things to witches meetings and an even greater time finding things that we need that others were going to toss.

Now I am going back to digging through stuff that I might take next Wednesday.

See you tomorrow.
Posted by Caseymini at 12:33 PM

Now that is a project! Good luck - Troy