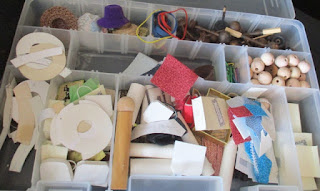 Someone asked if I would do a tutorial on the hat that I learned yesterday.  I can't share something that isn't mine.  It wouldn't be right...

But I can share my own hat pattern or possibly patterns.

I went to look for the box that I keep all of the hat stuff in... Oops....This is what it looks like right now. 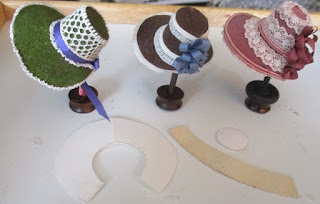 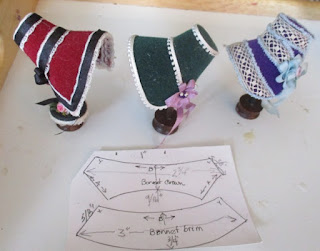 I forgot that I took Tessie's hat shop apart not to long ago.

Therefore, everything is a mess... So what else is new?

I used to sell hats at shows.  They were of my own design so some of those I can share with you.

Each of the three photos that you see here were developed over the years and parts of them are interchangeable to make different versions.

The first photo is a cross between a bonnet and a flat brimmed hat.  The brim is more conical than flat.  Each one trimmed to the way I wanted it to look. These were popular in the Empire period and later.

The second one is my bonnet pattern  It's just one pattern, but looks quite different in each case.  It is a matter of trim and how you cut the brim part. This was a popular style a little later on.  Up to the 1860s and 70s. 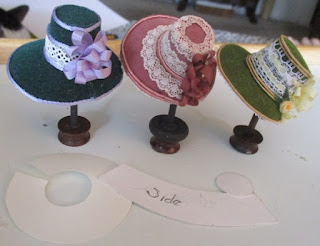 The last one is a more or less flat brimmed hat.  It can be made just plain flat or it can have a small piece cut out to make it more conical. It has made an appearance here and there at different times in the 18th and 19th centuries.

Again, these three are basically the same hat.  It's just the curve of the brim and the trim that make them different.

I am going to have to go back and make new patterns for each of the three.  Then I will, one at a time, show you how to make them.

There is a secret to all of these hats.  They are made from the velvet ribbon that you buy for decorating at Christmas, weddings and such.  I am going to go get some of the satin finished stuff and see if that works too.  I bought rolls of the velvet years ago and have enough to make hats from now 'til doomsday!  It doesn't take much to make one hat.

Anyway, I am going to go now an rework all of the patterns for you... Hang in there. I may throw in a couple of hat stands for good measure. I will try to start tomorrow.

Posted by Caseymini at 1:06 PM

Most of my favorite movies are costume dramas and the characters will be wearing hats much like your mini ones! Your collection of period hats are Lovely Casey and I hope that you are considering making another display for Tessie's hat collection because these are much too pretty to be hidden away!

Your hats are very beautiful.